Jakub Hrůša with Martinů at BBC Proms: Recording from the concert 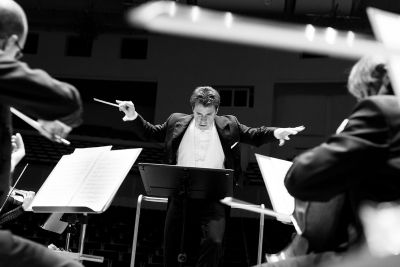 On Saturday, August 26, conductor Jakub Hrůša debuted at the BBC Proms at the Royal Albert Hall, where he presented a program related to the theme of the Bohemian Reformation. In featured compositions of all Czech greats: Smetana, Dvořák, Suk and Janáček. One of the highlights of the evening was the Field Mass, H 279, a cantata of Bohuslav Martinů composed as a reaction to the beginning of the Second World War.

„[Martinů] decided to compose a piece for Czechoslovak soldiers… and he asked readers of the magazine The Czechoslovak Struggle to donate instruments they didn’t need anymore to the Czechoslovak Army in Southern France,“ said director of the Bohuslav Martinů Institute Aleš Březina during the concert for BBC3. „Then he composed a piece exactly for the set of instruments they have been able to collect.“

Březina also talked about background of the piece and that Paul Wingfield recently publishedthe critical edition of Field Mass (as Vol.3 of the Bohuslav Martinů Complete Edition), including Martinů´s original ending of the piece, the old reformation hymn O Jesu Christ, bountiful Priest.

The recording of the entire concert with an interview with Aleš Březina is available on BBC3 until September 25, 2017.