The Greek Passion for the first time in Sweden

The Wermland Opera in Karlstad, Sweden, presents a new production of Bohuslav Martinů's Greek Passion, H 372 I. This opera will be seen in its first version, reconstructed by the director of the Bohuslav Martinů Institute Aleš Březina in 1999 for the festival in Bregenz. It had its Swedish premiere on September 14 (in English with Swedish surtitles), another 9 performances will take plance in Karlstad during September and October. A member of the Royal Opera in Stockholm, Nikoli Björling Rygert will sing the title role Manolios. More information: http://www.wermlandopera.com/node/1466/eventlist 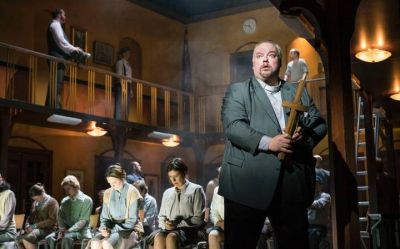 "The audience can come to the performance totally relaxed. They do not need to be afraid that there will be a moral pointed finger at them. This is about humanity, about conflicts that we all have to go through." Mira Bartov (director)