On October 9, two publications connected with Bohuslav Martinů will be officially launched at the National Theater Brno (Mahen Theatre). The first is a new critical edition of Martinů's chamber cantatas on the texts of Miloslav Bureš (Opening of the Springs, The Legend of the Smoke of Potato Tops, A Dandelion Romance and Mikesh from the Mountains), which was published as the 4th volume of the extensive project Bohuslav Martinů Complete Edition, prepared by Bohuslav Martinů Foundation, Bohuslav Martinů Institute and published by Bärenreiter. The first volume (The Epic of Gilgamesh) of this project won the prestigious prize of the German publishers Best Edition 2016, the project was also positively reviewed by the NOTES magazine. The editor is Vít Zouhar, who, together with Gabriela Coufalová, is the author of the book of letters by Bohuslav Martinů to Miloslav Bureš entitled Dear Friend Bureš, which will be also presented today at Mahen Theatre. 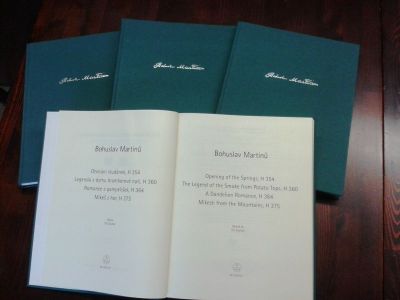 "Martinů traveled between France, America, Switzerland and Italy, and in all of these places his works were scattered. When he died, his wife Charlotte also gave away copies of some of his works. The most demanding of the whole work was to trace information in historical documents, to collect them and then to evaluate the relevant sources. I tis very important for the Complete Edition, in which I try to get closer to the author's intention," Vít Zouhar described his work.

Eva Velická, program director of the prestigious Bärenreiter Praha, praised the almost detective work Vít Zouhar underwent in preparing this critical edition. The book contains, in addition to sheet music, a detailed preface that presents a number of unpublished facts about popular, well-known cantatas. "He managed to present the first critical edition of the cantatas based on Martinů's intentions. Critical edition bound in canvas is published as the 4th volume of the extensive project of the Bohuslav Martinů Complete Edition, which is being realized by the Bohuslav Martinu Institute and Foundation. It is prepared at the highest conceivable musicological and publishing level," said Eva Velická.

The festive launch of both publications will take place on October 9 at 18.20 in Mahen Theater, just before the production of Alfréd Radok's Opening of the Wells, to which Vít Zouhar composed music. I will be presented by Jaroslav Miller, rector of Palacký University, Aleš Březina, director of the Bohuslav Martinů Institute, Jan Antonín Pitínský, director of Alfréd Radok's Opening of the Wells, Petr Francán, dean of the Faculty of Theater at Janáček Academy of Music and Performing Arts in Brno (JAMU in Brno), and Jiří Heřman, opera director and artistic director of the Opera of the National Theatre Brno.