New recording of the Epic of Gilgamesh by Czech Philharmonic 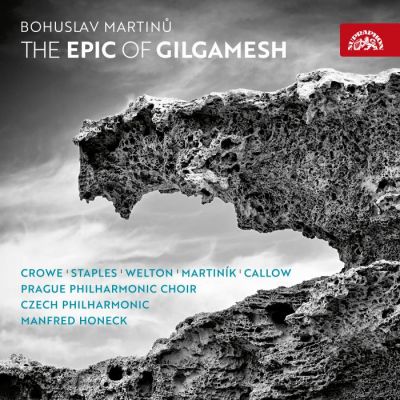 Today, Supraphon will release the premiere recording of the oratorio for soloists, narrator, mixed choir and orchestra in its original English version, as engrossingly performed by the Czech Philharmonic, conducted by Manfred Honeck. The new performance of The Epic of Gilgamesh, H 351, is based on the score’s critical edition, which has been prepared by the Bohuslav Martinů Institute in Prague. Along with top-notch soloists – the soprano Lucy Crowe, the tenor Andrew Staples, the baritone Derek Welton and the bass Jan Martiník – the album features as the narrator the British actor Simon Callow, who made his screen debut in Miloš Forman’s film Amadeus. An essential role in the score is assigned to the chorus, with the task being undertaken on the recording by the internationally renowned Prague Philharmonic Choir. All the performers were hand-picked for the concert and the album by the late chief conductor of the Prague Philharmonic Orchestra, Jiří Bělohlávek, who, however, for health reasons, conveyed the oratorio’s live performance in January 2017 to his brilliant Austrian colleague.

This January, Manfred Honeck, an Austrian conductor who has closely collaborated with the Czech Philharmonic and is currently serving as the music director of the Pittsburgh Symphony Orchestra, undertook the subscription concerts in Prague, within which Bohuslav Martinů’s oratorio The Epic of Gilgamesh was scheduled to be delivered under the baton of Jiří Bělohlávek. Yet the by then ailing chief conductor of the Czech Philharmonic was compelled to forgo the task, which also entailed a recording for Supraphon. Manfred Honeck voiced his regret that Jiří Bělohlávek had to cancel his engagement, since he knew that his colleague greatly admired the oratorio.

The music Martinů created during the last decade of his life demonstrates his penchant for religious and spiritual texts. The idea of setting the epic, depicting the adventures of the Sumerian King Gilgamesh, matured in the composer for 15 years. Although differing boldly from the avant-garde of the 1950s, it is an utterly modern piece, duly reflecting Martinů’s intense interest in Baroque music and the Notre Dame school. The oratorio, premiered on 23 January 1958 in Basel, was a tremendous success. Its performance in Prague in January 2017 by the Czech Philharmonic and a superb international team of soloists, conducted by Manfred Honeck, brought back to life the work’s English version, based on Reginald Campbell Thompson’s tran­slation. The recording, featuring a unique constellation of performers, renders the spiritually profound aspect of Bohuslav Martinů’s work with an exceptional emotionality.

Manfred Honeck said: “Bohuslav Martinů’s music possesses extraordinary acoustic qualities. Little bits of progressive elements, either relating to harmony or, more generally, sounds. In the 1950s, when he was writing The Epic of Gilgamesh, he really was at the height of his creative powers. It is one of his best pieces!” In respect of the new recording, the Austrian conductor added: “At the premiere six decades ago, it was sung in German. And the majority of the existing recordings were made in Czech. So now we finally have a recording of the Epic of Gilgamesh that uses the text in the language in which Martinů himself wrote it.”