The Prague Philharmonic Choir will perform Martinů in the Mariinsky Theater

The Prague Philharmonic Choir prepares for the first ever tour to Russia. Its three performances in the most prestigious concert halls of St. Petersburg and Moscow will offer music of Czech composers such as Leoš Janáček, Bohuslav Martinů and Antonín Dvořák. The Prague Philharmonic Choir, led by its choirmaster Lukáš Vasilek, will perform on February 12 the Cantatas of the Czech Highlands by Bohuslav Martinů, in one of the most famous opera houses, in the concert hall of the Mariinsky Theater together with Pavla Vykopalová (soprano), Jana Hrochová (alto), Martin Slavík (tenor) and Jiří Brückler (baritone). 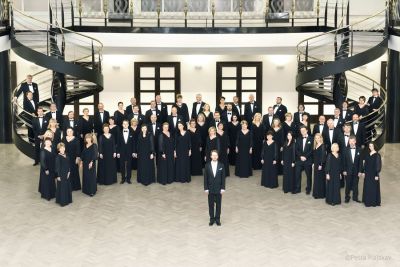 The album with Cantatas composed on Miloslav Bureš's lyrics (Opening of the Springs, Legend of the Smoke from Potato Tops, A Dandelion Romance and Mikesh from the Mountains) was recently nominated for the prestigious BBC Music Magazine Award in the Choir Category. Cantatas were released by Supraphon and recorded in accordance with the 4th volume of the Bohuslav Martinů Complete Edition (ed. Vít Zouhar), which came out last year. You can vote for the album here until February 19.