Those interested in Bohuslav Martinů and his music are most likely to know of Dr. František Popelka, an ardent promoter of the composer’s legacy. This year, he is celebrating a significant anniversary (he was born on 19 February 1933 in Polička). The “Dr.” before his name is of importance for the Polička natives, so as to distinguish him from his father, František Popelka, Sr. (1908-1989), a violinist, bibliophile, museum curator and an “old-school” enthusiast, who too was a great champion of Martinů’s music. In order not to be mistaken for his father. Dr. Popelka also signed himself as “Iša”, the children’s form of his first name. 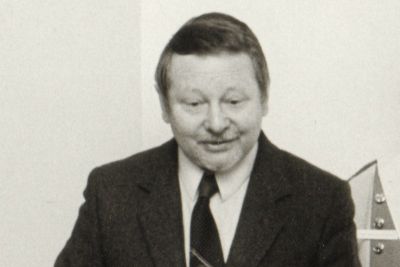 After completing his studies of musicology at Masaryk University in Brno, in 1957 he conceived the first large Martinů exhibition at the Polička Museum (followed by another one in 1973, and the installation of the updated display in 1984). For a long time, František Popelka, Jr. worked as an editor for the Supraphon label in Prague. From 1984 to 2000, he served as a musicologist at the Polička Museum, profiling and processing its ample Martinů collections. Polička’s reputation and prestige were markedly enhanced by the revival in 1984 of the Bohuslav Martinů Monument exhibition, marking the 25th anniversary of the composer’s death. František Popelka has installed a number of exhibitions and written a plethora of articles. Especially noteworthy is his book Martinů and Polička, an exclusive publication, which further promoted the artist and his native town alike, and also showed the author’s ethical opinions – although the manuscript was handed over in the middle of 1989 (before the Velvet Revolution), not a single sentence had to be omitted or replaced when it was published in the spring of 1990. Throughout his life, František Popelka has been an ardent, self-sacrificing promoter of Martinů’s music, a true professional and fellow-worker.

He initiated and compiled the programmes of the first few editions of the Polička 555 festival (from 1992) and the Martinů Fest (from 1996), which have continued to be held up to the present day.
We wish František Popelka all the very best on his birthday, good health and continued satisfaction!