The fifth and final volume of the complete songs by Bohuslav Martinů has been released. Featuring mezzosoprano Jana Hrochová (Wallingerová) and pianist Giorgio Koukl as in previous volumes, the album released by Naxos offers more than 30 songs written in the first half of the 20th century. It also includes 3 Songs after Poems by G. Apollinaire, long thought to be lost but rediscovered just few weeks before recording. „The music is surely the highlight of all the edition's five volumes,“ says Jana Hrochová. 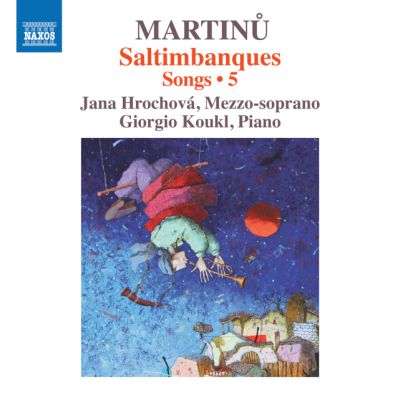 “Sometimes a musical work is similar to a pearl. It is born out of hardship, pain and discomfort and, after a while, it becomes precious and admired. This is particularly true of some of Martinů’s songs, presented here for the first time, declared lost and recorded after more than 80 years of oblivion,“ says Giorgio Koukl, who is known for his recording of Bohuslav Martinů’s complete piano work for Naxos. „I would like to imagine that this work of rediscovery – difficult, challenging and sometimes painful – will become one day like the pearl it should have been many, many years ago.”

„As usual, Koukl’s playing is exceptional in every respect, catching the mood of each piece perfectly while bringing out both the sensitivity and the quirkiness of each piece on the album.“ Lynn René Bayley, The Art Music Lounge

The CD is available here: https://www.naxos.com/catalogue/item.asp?item_code=8.573823