The Greek Passion for the first time in Russia 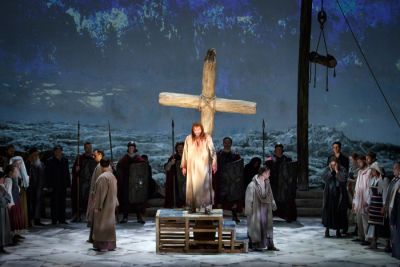 The opera in four acts was written between 1954 and 1957 by Martinů, who himself wrote the libretto based on the novel of the Greek writer Nikos Kazantzakis Christ Recrucified. Martinů was forced to change his last opera completely due to a complaints of Royal Opera in London management, but even so, he did not live to see neither of the two versions. The original version, after almost 40 years, was reconstructed by the director of the Bohuslav Martinů Institute Aleš Březina, thanks to who the original face of the opera could be premiered in 1999 at the Festival in Bregenz, Austria. One year later The Greek Passion was performed in the place where Martinů initially wished it to – in Royal Opera Covent Garden in London. Since then, the opera was staged in in Bremen, Brno, Thessaloniki, Palermo, Graz and Karlstad.

„I’ve tried to show human reactions to certain events so that anyone who comes to the theater and watches our production chooses what is right and what is wrong,“ says director Thaddeus Strassberger. More information about the production are here.