Recording of the Month goes to Bouquet of Flowers

The recently released recording of the Bohuslav Martinů’s Bouquet of Flowers, which was recorded by the Prague Radio Symphony Orchestra led by conductor Tomáš Netopil, has received award Recording of the Month by the MusicWeb International. The new recording by Supraphon with Jan Novák's Philharmonic Dances was recorded also by soloists Kateřina Kněžíková, Michaela Kapustová, Jaroslav Březina, Adam Plachetka, the Prague Philharmonic Choir, and Kühn's Children's Choir. The full review is available here. 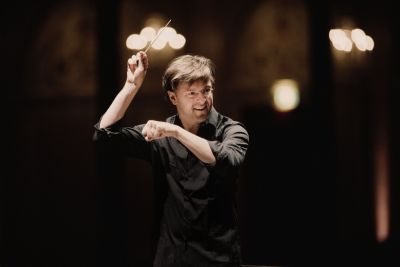 Bohuslav Martinů's Bouquet of Flowers was recorded after more than 60 years after the premiere recording made by Karel Ančerl and the Czech Philharmonic in 1955, which Bohuslav Martinů himself listened to at Schönenberg. In addition to MusicWeb International, other prominent music magazines also appreciate the new recording.

“For those who love Czech music, this is a highly valuable disc. For those, like me, passionate about Martinů, it is indispensable… Performances throughout are excellent. Recordings are clear, and Netopil is emerging as a formidable musician. I have been impressed by previous recordings, and the Czech musical tradition seems very safe under his direction.”
MusicWeb International, April 2018

“Tomáš Netopil’s new account is a more than satisfactory alternative, gentler and softer than the older version but with no loss of precision, not least in the folk-cum-Stravinskian rhythms. To cap it all, the first studio recording of Jan Novák’s scintillating, Martinů-esque Philharmonic Dances (1955-56): why has it taken 61 years for this terrific tribute to the Czech Philharmonic to arrive in the studio? Buy and enjoy!”
Gramophone, February 2018

“An idiomatic performance of Bouquet of Flowers, an engaging cantata based on folk song, and displaying hints of Janáček and Stravinsky.”
BBC Music Magazine, March 2018