The new album with Martinů’s double-concertos and concerto for solo instruments and orchestra has been released by Pentatone label. Soloists are women only, sisters Momo and Mari Kodama perform Concerto for Two Pianos and Orchestra, H292, as well as sisters Deborah and Sarah Nemtanu who perform Concerto in D major for two violins and orchestra, H329. Rhapsody-Concerto for Viola and Orchestra, H 337 is played by violist Magali Demesse. The new CD is recorded by Marseille Philharmonic Orchestra and conductor Lawrence Foster. 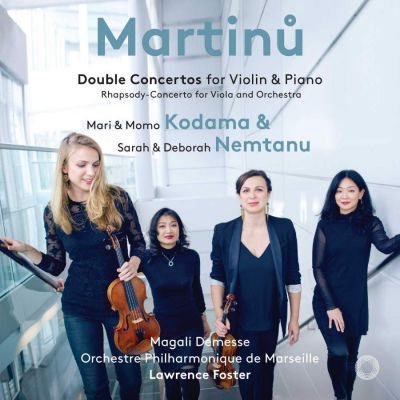 „I know no work of Martinu’s that outlasts my interest. He is incapable of being boring. This jam-packed recording presents three of his most scintillating works. If they don’t convert you to Martinu, nothing will,“ writes Norman Lebrecht (La Scena Musicale). „I have five favourite recordings of the Rhapsody-Concerto – now, make that six.“

You can find out more about the album here.