Bohuslav Martinů in the upcoming season of the National Theatre Brno

The National Theatre Brno revealed its program for the 2018/2019 season, in which it will commemorate the 60th anniversary of the death of Bohuslav Martinů (1890-1959). During the season, it will stage one premiere of Martinů’s opera and two other productions from previous years. 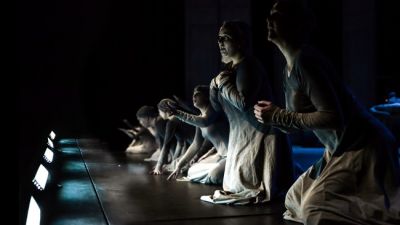 Janáček Theatre in Brno will host once again the succesful production of Bohuslav Martinů´s opera The Plays of Mary which had its premiere in 2015. The production by director Jiří Heřman received so much appraisal it eventually substituted Puccini´s Madama Butterfly on the programme.

In April 2019, two performances of the pieces the Epic of Gilgamesh and Dido and Aeneas by Henry Purcell will be staged in the National Theatre Brno. This production is the output of the cooperation of director Jiří Heřman and conductor Marko Ivanović.

In June 2019, the premiere of the works by Martinů and Poulenc will take place in Janáček Theatre. "The June premiere will get on with the already well-established cooperation with the Göteborg Opera. David Radok returns to the stage of the Janáček Theatre, this time with a dreamy project connecting two works of the 20th century - Poulenc's Human Voice and Three Fragments from Juliette by Bohuslav Martinů," says Jiří Heřman. Set designer and director of the project will be David Radok and the operas will be prepared by the conductor Marko Ivanović. The Three Fragments from Juliette, H 253 A composer selected from his opera and revised directly from the original French text by Georges Neveux. Both operas will be staged in the original French with Czech and English surtitles.