Today, a great lover of music, a Swiss priest and a close friend of Bohuslav Martinů Max Kellerhals (24. 9. 1918 - 24. 8. 2013) would be 100 years old. He was a priest in municipalities in the canton of Basel–Landschaft, near Liestal, the town in which Bohuslav Martinů died. Max Kellerhals accompanied Bohuslav Martinů in the final days of his life and participated in organising his funeral in Switzerland and, twenty years later, the transportation of the composer’s remains to Czechoslovakia. 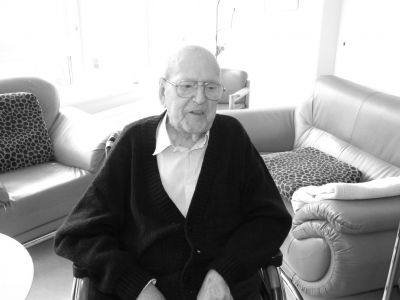 Max Kellerhals made the acquaintance of Bohuslav Martinů at the beginning of September 1955 at the Besançon festival, where he had come to attend a concert of Martinů’s Concerto for Two Pianos and Orchestra conducted by Rafael Kubelík. „After the Rebers returned from the USA, we visited Rafael together at his orchestra rehearsals, including those in Besançon. At one of the rehearsals, a married couple arrived and sat to the left of us. During the intermission, Rafael came over and asked us: “Do you know each other? They are the Martinůs.” So, that was the beginning of our very spontaneous relationship, which would last until Bohuslav Martinů’s death. The concert at Besançon was astounding, featuring, among other pieces, Martinů’s Concerto for Two Pianos and Orchestra, as performed by the Belgian piano duo Reding-Piette, who gave a fantastic account of it. The audience were enthralled and it was a tremendous success,“ said Max Kellerhals. Since 1995, Kellerhals and Martinů saw each other several times, most frequently during Martinů’s stays with the Sachers at Schönenberg.

Max Kellerhals was present at the premiere of the oratorio The Epic of Gilgamesh in Basel in 1958. He was sitting in the first row, close to the composer. He also accompanied Martinů at the performance of Juliette in Wiesbaden, Germany, in January 1959, the very last staging of the opera that the composer saw.  When in the summer of 1959 Martinů was hospitalised in Liestal, Max Kellerhals became one of the Martinůs’ closest friends. Charlotte Martinů wanted their marriage to be additionally blessed by the Church, and hence, on 16 August 1959, Max Kellerhals married Charlotte and Bohuslav Martinů in church. „All of us, almost moved to tears, raised a toast to Charlotte and Bohuslav Martinů’s marriage in the room in which 14 days later he died. For all of us, it will for ever remain something amazing and unforgettable,“ remembered Kellerhals.

After the death of Martinů, Kellerhals was present at the funeral, where he served a requiem mass for the deceased composer and delivered eulogy over the coffin. In 1979, during the transport of the remains, he was present at the opening of the coffin and subsequent ceremony in Polička. Whenever there was an opportunity, he attended the Swiss, but also the Prague Bohuslav Martinů Festival and all performances of his operas in nearby countries.