On Friday, October 12, clarinetist, pedagogue and director of the Bohuslav Martinů Foundation professor Jiří Hlaváč, celebrated his 70th birthday. On this occasion, a congratulatory concert will take place on October 20th at the Martinů Hall, where the Dvořák Chamber Orchestra, conductor Jaroslav Vodňanský and Professor Jiří Hlaváč will perform works by Martinů, Janáček, Svoboda, Richter and his own. 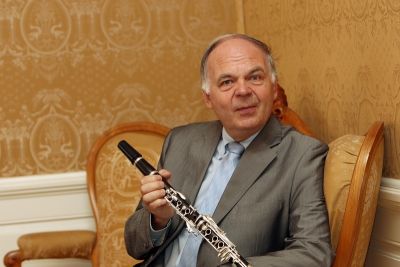 Prof. Jiří Hlaváč (* 12 October 1948, Zlín) is a clarinetist, pedagogue, manager, poet, writer and composer. He studied clarinet at the Brno Conservatory and at the Music Faculty of the Academy of Performing Arts in Prague. During his concert career, he had more than 5,000 performances in 48 countries. He has been awarded prestigious awards, such as the Golden Shield for CD Genus in 1989 or Gramy Classic 1993. In addition to his artistic career, he is engaged in the education of new musical talents. His students have repeatedly won prestigious international competitions in Lisbon, Nuremberg, Madeira, Prague, Paris, Markneukirchen, or Bayreuth. From 2000 to 2006, he was the Dean of HAMU in Prague, where he is currently a clarinet professor. He has also worked in various music institutions, such as Prague Spring, Concertino Praga or the Life of the Artist Foundation (Nadace Život Umělce). 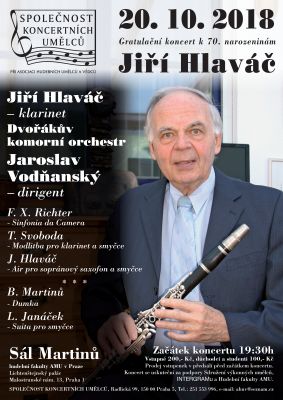