You can find all the photos from the concert here. 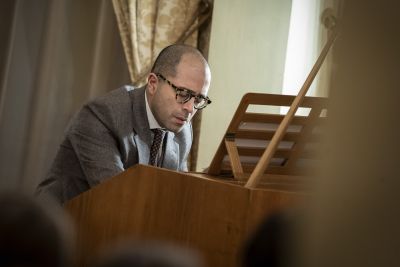 The partnership between the Bohuslav Martinů Institute and the Bärenreiter publishing house has already released six volumes of the complete sheet music edition of the composer’s works. The project is scheduled for the next half-century – the pace is limited both by research and publishing capacity and by market saturation. For the fourth year running, the critical edition has been supported and promoted by a benefit concert. This time, the harpsichordist Mahan Esfahani placed his art in the service of the ambitious cause. Besides Martinů, the logical repertoire choice was Bach and Kalabis, as he was the last pupil of the latter’s wife, Zuzana Růžičková.

The chamber music soirée, held on Monday at the Kaiserstein Palace in the Small Side of Prague, drew a comparable audience: Esfahani’s art is sufficiently attractive – and further bolstered by public willingness to help a good cause. The three compositions, interpreted on two different harpsichords in the intimate atmosphere of the auditorium, where the musician is on the same level as the audience and everyone is close to each other, was a truly exclusive event. Bach’s Partita in C minor was framed by Bohuslav Martinů’s Sonata and Viktor Kalabis’ Aquarelles. 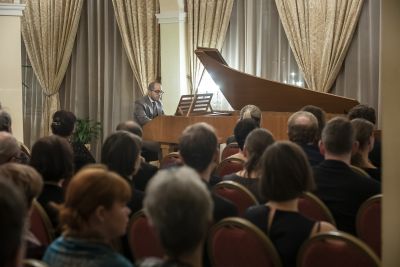 Mahan Esfahani interpreted Bach on a relatively new copy of Mietke’s instrument from c. 1710, produced by the Hradec Králové workshop of Jan Bečička & Stanislav Hüttl & Petr Šefl. Stylishly, richly, multifariously, zestfully, flawlessly; the expansive music flowed like a musical current devoid of any formality or reserve. For Martinů and Kalabis, he chose a different instrument – a massive, decades-old, performance-tried, modern-brand Ammer of the so-called Bach Model with a richer palate of registers. This allowed him to use various timbres. This diversity was especially suited to the strongly polyphonic Aquarelles, a 1970s composition written for Zuzana Růžičková, and it benefited the work enormously in the constantly shifting acoustic counter-positioning of the hands and the discernment of motives. The music gained greater plasticity and attractiveness. Bohuslav Martinů’s Sonata from the 1950s is a shorter, neo-Baroque piece, which provided an endearing and unpathetic start to the evening.

At the close of 2015, the Bohuslav Martinů Institute commemorated its twenty years in the service of the legacy of this classic of modern Czech music. Initially under the auspices of the Bohuslav Martinů Foundation, it has functioned as an independent public benefit company for the past decade, though the foundation remains its main partner and sponsor. Its primary goal is to collect all available documents written by Bohuslav Martinů and all materials related to him, so that musicologists, musicians, and the broader public can study the composer’s life and work in the full context of his time. The greatest and most important project of the Institute is the complete edition of the works of Bohuslav Martinů.

The scholarly edition will make public all the compositions in all authorial or authorised versions and arrangements and will complement them with works newly discovered or as yet unpublished. Working with both musical and non-musical sources, such an edition compiles all knowledge of the notation and its context and serves as a guideline for the publication of practical performance materials. The very first volume received special recognition at the Frankfurt Music Fair when it was awarded Best Edition 2016 by the Union of German Music Publishers, and further volumes receive regular attention from reviewers both at home and abroad. For example, the music journal Opus Musicum noted just this year that the first volumes of the complete edition “promise an extraordinary feat of publishing”. 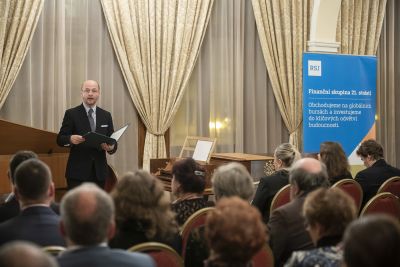 Martinů has been published in this way since 2014, and the critical edition of his music will comprise more than one hundred volumes in total. “We endeavoured to have the first of them cover various forms and genres, to show the breadth and diversity of Bohuslav Martinů’s oeuvre, but we are now moving on to a pragmatic selection of subsequent compositions to publish, according to how well they are processed and how accessible the sources are,” Aleš Březina, Director of the Bohuslav Martinů Institute, commented on the publishing schedule in an interview for KlasikaPlus. Volumes already published include The Epic of Gilgamesh, Symphony No. 4, chamber music for six to nine instruments, the Bureš cantatas, String Quartets Nos. 4 through 7, and the “quadruple concertos”, that is, String Quartet with Orchestra and Sinfonia Concertante No. 2. And what will be next? Concerto da camera and Rhapsody-Concerto for Viola and Orchestra, Piano Concertos Nos. 4 and 5, Ariadne, The Parables and The Frescoes of Pierro della Francesca, Cello Concerto No. 1. And so on… The schedule is clear. In six years, the edition should publish Double Concerto for two string orchestras, piano, and timpani. And forty years later, in the sixties of this century, the edition should be completed when both versions of the opera The Greek Passion are released in the market, says Aleš Březina.

How is the harpsichordist Zuzana Růžičková connected to all this? She was the wife of the composer Viktor Kalabis, who left a mark in Czech music culture both with his compositions and with his activities as a promoter of artistic and cultural events. The erstwhile employee of Czechoslovak Radio is remembered as one of the founders of the international competition of young musicians Concertino Praga; in the winter of his life he was highly active in the Bohuslav Martinů Foundation. Martinů’s music accompanied him his whole life – ever since the end of World War II, when he thought Martinů would come back home from America and that he could perhaps study under him.