Complete Cello Sonatas recorded by Nouzovsky and Wyss are out now

After an album with complete works for cello and orchestra by Bohuslav Martinů, released in 2017, one of the most prominent Czech artists, Petr Nouzovský, comes with another album with works by the Czech composer. Together with the legendary pianist Gérard Wyss, they recorded Martinů’s cello sonatas from 1939 to 1952 for ArcoDiva label. The album was presented on May 6 at the Bohuslav Martinů Foundation in Prague. 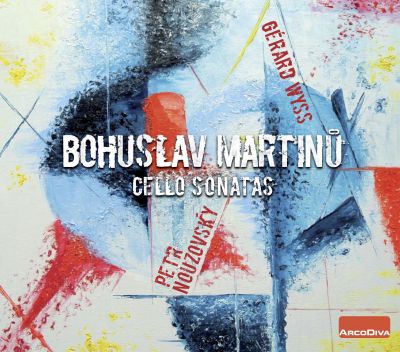 The new album with Bohuslav Martinů's sonatas for cello and piano is released just two years after the cellist Petr Nouzovský together with the Pilsen Philharmonic under the direction of Tomáš Brauner recorded successful Martinů’s complete works for cello and orchestra, which was awarded the best album of 2017 at the Classic Prague Awards and the German Record Critics' Award 2017. “This album is another milestone for me. After a successful CD with Bohuslav Martinů's concertos, which I had the opportunity to record, the question arose whether I would throw myself on another author or if I would like to deal with my favorite composer further. I decided well, which is confirmed not only by the praiseworthy reviews, but mainly by my feeling,” admits Petr Nouzovský.

Bohuslav Martinů (1890 - 1959) was a world famous Czech composer of the 20th century. His three sonatas for cello and piano, composed between 1939 and 1952, were all composed outside of Czechoslovakia. Sonata for Cello and Piano No. 1, H 277 from 1939, which was written by Martinů in Paris in response to the establishment of the Protectorate of Bohemia and Moravia, was dedicated to the famous French cellist Pierre Fournier, with whom Gérard Wyss, the protagonist of the new recording, has performed in the past. Sonata for Cello and Piano No. 2, H 286 from 1941 was composed after Martinů’s forced exile to the U.S. At that time, Martinů lived in New York, where his neighbour was Czech-born organist and cellist Frank Rybka, and it was to him that Martinů dedicated his second sonata. Only in 1952, after returning to Europe, Martinů composed his third Sonata for Cello and Piano, H 340, in Vieux Moulin near Paris.