The Piano Concerto No. 4 "Incantation" by Bohuslav Martinů and the Concerto for Piano and Orchestra in G minor by Antonín Dvořák are now released on a new album by Supraphon. Both concertos were recorded by Ivo Kahánek together with the Bamberger Symphoniker led by Jakub Hrůša in 2017 and 2019 in the concert hall of the Bamberger Symphoniker. The album was released by Supraphon, with the support from the Bohuslav Martinů Foundation. The album is available here. 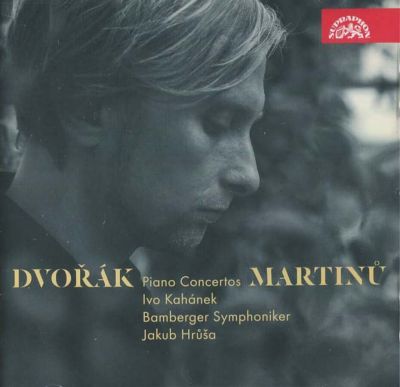 When, after the end of World War II, German musicians (players of the German Philharmonic in Prague, as well as musicians from Karlovy Vary and Silesia) expulsed from Czechoslovakia on the basis of the Beneš Decrees settled in Bamberg, located a mere 300 kilometres from Prague, they gave rise to an orchestra noted for a Czech sound and nowadays considered to be one of the finest in Germany. Its connection with Jakub Hrůša, one of the most distinguished contemporary young conductors, is yet another – and by far not only symbolic – step towards an organic coupling of the Czech and German elements reflecting in the Bamberger Symphoniker’s sou­nd and performance qualities.

Highly symbolic, though, is the selection of Bohuslav Martinů’s Piano Concerto No. 4, Incantation, for an album recorded by a German orchestra with a Czech conductor and a Czech soloist. The same war that deprived the players of the German Philharmonic in Prague of their home, made Bohuslav Martinů leave his country and Europe itself. The composer wrote the Incantation in New York in the twilight of his life, when it must have been evident to him that he would never return to his homeland. Martinů’s own characterisation of the work („an expression of unceasing seeking of truth and the meaning of life, as well as a tribute to music, a musician’s refuge, his strength and weapon“) serves to attest to the importance he himself attributed to the piece. The work is also exceptional due to its highly unconventional two-movement structure, with the composer abandoning symmetry and letting himself drift away in imagination, seemingly without any formal rules. Yet the Incantation is actually built with a profound inner order.

The soloist featured on the new album, Ivo Kahánek, expressed his high opinion and affection for the work: „I personally consider Incantation to be one of the finest works of Martinů’s and one of the best pieces of Czech music in general, as well as one of the most singular compositions for piano and orchestra of the second half of the 20th century. All the facets, from motoric rhythmicity, through passion and tragedy, to dreamy surrealism, form together a truly breath-taking whole.“ The selection of the soloist for the recording was by no means random. Kahánek has played the Incantation at concert halls all over the world (BBC Symphony Orchestra, Jiří Bělohlávek – BBC Proms; Berliner Philharmoniker, Sir Simon Rattle – Berlin, Prague, etc.). The performance of the piece in Bamberg, captured on the present album, was lauded by the critics as revelatory. „The Fourth Piano Concerto by Bohuslav Martinů surrendered unexpected treasures to the Bamberger Symphoniker and the phenomenal pianist, Ivo Kahánek… Kahánek presented his pianism at its utmost level of sensitivity, tackled virtuoso cascades with extrovert nonchalance and the delicate and also striking Adagio with a touch of lyricism. The piano concerto has indeed become the surprise discovery of the evening.“ (Bachtrack.com, January 2019). The recording of the Incantation, made by the Bamberger Symphoniker, Jakub Hrůša and Ivo Kahánek, thus not only presents a new approach taken by the young generation of musicians, it can also be expected to become a new etalon and a great challenge for those who would perform the work in the future.

Although, in comparison with Martinů’s piece, Antonín Dvořák’s Piano Concerto in G minor has been far more frequently performed, and recorded by renowned pianists, it too affords scope for discovery. Ivo Kahánek clearly opted (in line with Sviatoslav Richter’s account) for returning to Dvořák’s original version of the solo part, which has been subject to arrangements and „improvements“ with the aim to boost its virtuosity and brilliance. Yet Dvořák never cared much about such instrumental effect, focusing instead on achieving as profound an expression as possible (including in his later concertos for violin or cello). Accordingly, Kahánek’s per­formance, based on Bärenreiter Prague’s new edition, has brought back that which is peculiar to Dvořák’s music: the transcendent melodiousness and tenderness, with the technically challenging piano part being in the service of the entire composition. As Jakub Hrůša put it: „The concerto possesses immense power and beauty, representing an interesting task for the conductor, an equal dialogue, with the orchestra and the conductor always having something to offer.“

The recordings were made in 2017 and 2019, in collaboration with a top-notch Bayerischer Rundfunk (BR Klassik) team, at the Joseph-Keilberth-Saal, the Bamberger Symphoniker’s home venue, whose acoustics are among the best in Europe.