The recording of Antonín Dvořák’s and Bohuslav Martinů’s piano concertos, made by the pianist Ivo Kahánek and the Bamberger Symphoniker under the baton of Jakub Hrůša has garnered critical acclaim since its release last September (BBC Radio 3 Disc of the Week; BBC Music Magazine Recording of the Month; Choix de Classique HD). Now it has been selected as one of the three BBC Music Magazine Award nominees in the „Concerto“ category. The public vote started on 16 January and will close on 19 February 2020​. 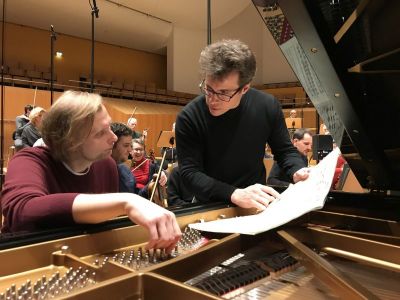 „We tried to make the best possible performance of the works of our national giants Antonín Dvořák and Bohuslav Martinů. I am pleased that in addition to the many awards this recording has received, the result of our endeavors is that Czech music is not only seen as something exotic, but also that it becomes a respected and sought-after part of the world repertoire,“ says pianist Ivo Kahánek.

An extraordinary constellation of artists is one the major attributes of the recording featuring Dvořák’s and Martinů’s piano concertos – a Czech conductor and a Czech soloist, and a German orchestra, who have a Czech sound in their DNA. All three of them enjoy great esteem in both the European and global contexts. Symbolic is the selection of the album’s repertoire. Bohuslav Martinů wrote his Piano Concerto No. 4, „Incantation“, in New York in the twilight of his life, when it was evident that he would never return to his homeland. The recording of Antonín Dvořák’s Piano Concerto is one of the most convincing accounts of the composer’s original version of the work, forbearing the „effective and virtuoso improvements“ carried out by its later arrangers. Supraphon released the recording at the end of September 2019 with support from the Bohuslav Martinů Foundation.

The 21 CDs that have received nominations were released last year by 17 renowned labels all over the world. The recordings, divided into seven categories (instrumental, chamber, orchestral, choral, vocal, opera and concerto), are the best of the more than 1,500 albums that were reviewed in BBC Music Magazine during the course of the past year. The artists featured on the recordings nominated for the awards include such global stars as Gidon Kremer, John Wilson, Kirill Gerstein, Sabine Devieilhe, Olivier Latry, Kremerata Baltica, Boston Symphony Orchestra, Royal Stockholm Philharmonic Orchestra and Choir of Merton College Oxford. The winners of the BBC Music Magazine Awards will be announced at a ceremony on 22 April 2020 at Kings Place in London.