In January, the opera Juliette had its last performance in Ostrava, which was staged by the National Moravian-Silesian Theater for the first time in its history. The production was prepared by director duo SKUTR (Martin Kukučka and Lukáš Trpišovský) and conductor Jakub Klecker, among others. Here we bring you the latest review by John Allison from the March issue of the prestigious Opera magazine. 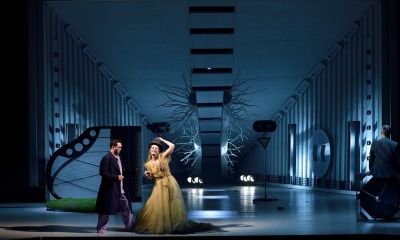 Now in its centenary season (a milestone to be celebrated with a gala next month), the national moravian-silesian theatre boasts a distinguished tradition. For the last decade it has been under the general directorship of the stage director Jiří Nekvasil, whose fingerprint is clear in both the adventurous programming and the performance levels— qualities that came together illuminatingly in the house’s recent new production of Martinů’s Julietta (seen on January 19). It’s a rare privilege to witness a staging quite so in harmony with a work as this one, a production balanced delicately over that place where reality ends and illusion begins; in other words, it was a perfect match for Martinů’s dream-web of sound, a score that attains its own trance-like quality and in which the musical ground is constantly shifting thanks to those recurring ‘Julietta chords’, a distinctively altered and enriched plagal cadence punctuating the music. A gift to directors—Julietta is the story of a dream in which the hapless bookseller anti-hero Michel pursues his ideal woman and chooses to remain in the dream rather than return to the real world—the opera cannot be staged without recourse to layers of surrealism and symbolism. Yet critically, this staging never drifted too far into surrealism, because the work (based on George Neveux’s play Juliette, ou La Clé des songes) is also rooted in a very real situation: as well as exploring the role that memory plays in human existence, its Kafkaesque plot speaks of the homelessness of a composer whose native Czechoslovakia was trampled over soon after its 1938 premiere.

Directed by the genre-mixing duo known as SKUTR (Martin Kukučka and Lukáš Trpišovský), this Julietta was poetic and painterly, full of symbols coming to life. Martin Chocholoušek’s striking white-toned sets were rich in realistic detail that almost lulled one into seeing things that maybe weren’t there—for example, the railway station hall in Act 1 seemed to make sense of (or further confuse) the references to the railway (or lack thereof) in the libretto. Simona Rybáková’s costumes used colour to express the strange atmosphere of the opera, and many characters were dressed contemporarily, though some of the women’s dresses were grimy with the passage of time. A grand piano, turned on its side with its legs removed, was dragged on and off as cued by the score—the piano is a special sonority in the score and Julietta’s initial appearance in Act 2, glimpsed through the instrument’s translucent soundboard, confirmed how she is embodied in its sound. In a staging that told the story with as much clarity as possible, yet left one guessing, such things as the carrying around on a stretcher of Julietta’s veil seemed to have many-layered meaning and left tantalizing question marks in the air. Intriguingly, in the Office of Dreams the Official was dressed identically to Michel, in the same pyjamas and overcoat. This was a production that didn’t dictate any conclusion, and instead relished the ambiguities and incomprehensibility of it all.

Jakub Klecker, the theatre’s music director, mined the score for its depths and drew an uncommonly warm orchestral performance. The playing had punchy muscularity and dramatic drive, yet the layers of sound came across with rare precision. The entire opera was strongly cast, beginning with an ideally matched leading pair in Doubravka Součková’s Julietta and Jorge Garza’s Michel. This Julietta was both a spectral figure and a real woman, an ethereal fairy yet a free spirit full of temperament. Singing with a shimmering luminosity, she was hard to pin down (but then does she exist?).

Garza disclosed a plangent tenor as Michel, a figure much put-upon during his fruitless search for his imagined real woman. Petr Leviček displayed a strong if darker and different tenor in his multiple roles as the Police Officer, Postman and so on, and proved a compelling actor too. Markéta Cukrová’s warmvoiced Young Arab and Jiří Rajniš big-toned Old Arab and Seller of Memories also stood out, but indeed the entire cast, many playing multiple roles, showed themselves to be singing actors of a sophistication not found in many places and added their own layers to the ‘opera of dreams’ that is Martinů’s masterpiece.