The recording of Antonín Dvořák’s and Bohuslav Martinů’s piano concertos, made by the pianist Ivo Kahánek and the Bamberger Symphoniker under the baton of Jakub Hrůša, has garnered critical acclaim since its release last September. It has been voted BBC Radio 3 Disc of the Week, BBC Music Magazine Recording of the Month, Choix de Classique HD, Album der Woche – BR Klassik and Choc de Classica. And now the album has received the prestigious BBC Music Magazine Award in the „Concerto“ category. 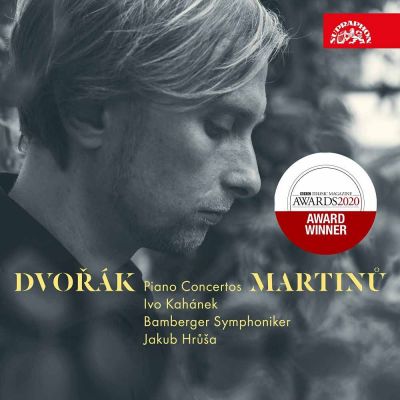 „The BBC Music Magazine Awards are particularly unique due to their reflecting the opinions of specialists and classical music fans alike. I am immensely happy and honoured we have won the accolade for Czech music! Here I stress ‚we‘, as recording a CD is, to a certain degree, comparable to making a short film: you must take many small steps, while you can never go astray, and – more than anything else – you need a team approaching the work professionally and with love. So I would like to extend my thanks to all those who participated in the making of the recording – the Bamberger Symphoniker, Supraphon, the Bavarian Radio and, of course, the album’s generous patrons, Julius Prüger and the Bohuslav Martinů Foundation, as well as, most notably, Jakub Hrůša, whose artistic and human contribution to the project’s imple­mentation is simply priceless,” said Ivo Kahánek. “And notwithstanding that owing to the coronavirus pandemic we are experiencing difficult times, I really hope that recordings like this one become symbolic assurances, affording to all music lovers the feeling that while we cannot see each other at concert halls we are in a certain sense still together…“

The conductor Jakub Hrůša commented as follows on having won the coveted accolade: „I feel immensely honoured to have received a BBC Music Magazine Award. Collaborating with Ivo Kahánek and the Bamberger Symphoniker is absolutely amazing, while Dvořák’s and Martinů’s music is among my most beloved. We worked and performed at concerts intensively, with great engagement and verve. I am really proud that our album, featuring lesser-known works by the two great masters, has received such a prestigious award. At the same time, l feel immensely energised for further activity. I cordially thank all those who have given us their votes. It is you for whom we play and make recordings!“

The 21 CDs that received nominations were released last year by 17 renowned labels all over the world. The recordings, divided into seven categories (instrumental, chamber, orchestral, choral, vocal, opera and concerto), are the best of the more than 1,500 albums that were reviewed in BBC Music Magazine during the course of the past year. The artists featured on the recordings nominated for the awards include such global stars as Gidon Kremer, John Wilson, Kirill Gerstein, Sabine Devieilhe, Olivier Latry, Kremerata Baltica, the Boston Symphony Orchestra, the Royal Stockholm Philharmonic Orchestra and the Choir of Merton College Oxford. Supraphon released the recording of Antonín Dvořák’s and Bohuslav Martinů’s piano concertos with the support of the Bohuslav Martinů Foundation. The artists also collaborated with the Bohuslav Martinů Institute on Martinů's Incantation, which was prepared by the IBM as a critical edition.

The winners of the BBC Music Magazine Awards were announced on 11th May 2020 via magazine’s website www.classical-music.com/awards.