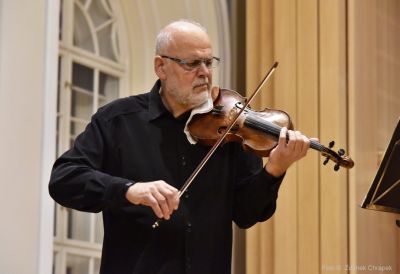 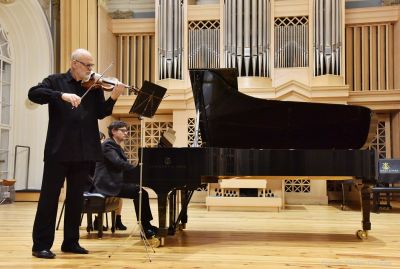 Thirty years of service as an organist at St Clotilde’s Basilica in Paris, a professorship of
organ play and improvisation at the conservatoire, and an excellent body of organ
compositions… those are some of the career highlights of César Franck (1822–1890). His
compositional output in other areas is far from bland, either; and yet he was only fully
recognised in the last years of his life. Before coming to the Paris Conservatoire, he studied
under Anton Reicha, a composer of Czech origin, similarly to Gounod, Berlioz, or Liszt.
Franck’s legacy includes a single, now-popular Symphony in D minor, which he finished
aged 68. It garnered cold reactions at its premiere, presumably because of how it mingles its
French spirit with a German heritage. Less known are Franck’s tone poems, and even less
so his oratorios Les Béatitudes and Redemption. The composer’s symphonic oeuvre cannot
conceal his expansive organ-induced imagination. His chamber works evince a balance
between emotions and the heritage of polyphony and classical forms. His Sonata in A major
for violin and piano is one of the key works of the Romantic repertoire. The first movement
exposes a strongly lyrical theme; the energetic second movement exposes a different theme.
Both are then interwoven in the free-flowing fantasy of the third, giving rise to a canon that
opens and concludes the proportionally perfectly balanced finale. Franck wrote the Sonata at
the age of 63 as a wedding gift for the violinist Eugène Ysaÿe. Ysaÿe regularly performed the
piece for the next 40 years, decidedly contributing both to its popularity and to the
compositional renown of César Franck…

Bohuslav Martinů (1890–1959) was born in Polička exactly one month after César Franck
died in Paris. He himself then moved to Paris in the early 1920s, although he would often
visit Czechoslovakia. After the outbreak of World War II, he managed to emigrate to the US.
He made a name for himself there both with his symphonies and operas and with his works
for prominent soloists and ensembles. When the war ended, he lived alternately in America
and in Europe. The Communist coup in Czechoslovakia and the Cold War definitively barred
him from returning to his own country. Martinů stands at the opposite end of the artistic
spectrum compared to the post-war European avant-garde. His compositional ethos matured
under the influence of Impressionism, Stravinsky, Les Six, jazz, Neoclassicism, and Czech
lyricism. Over the years he gradually developed a musical language replete with superb
instrumentation, ideological depth, lyrical fervour, dramatic urgency, and humanistic pathos.
His first symphony was premiered in Boston in November 1942, his second in Cleveland in
October 1943, while the third originated in the American countryside during the summer of
1944, though its Boston premiere came later. Sonata No. 3 for violin and piano was
completed by Martinů in New York in December 1944. Its first performance came a year later
in Carnegie Hall, the same venue as Dvořák’s “New World” Symphony. The composition
displays dramatic force and a brilliant piano part that unfurls into expressive lyricism in the
second movement. The subsequent movements show the sonata’s fundamental relation to
Dvořák’s music and finally reveal themselves as a herald of the positively minded Fourth
Symphony, which Martinů composed in the spring of 1945.

Bohuslav Matoušek
studied at the Academy of Music in Prague; in 1969 he attended
masterclasses by A. Grumiaux in Zurich and then by N. Milstein. A Swiss scholarship
allowed him to train under W. Schneiderhan in Lucerne. He was invited to Japan in 1977 to
join the Yomiuri Nippon Symphony Orchestra in Tokyo, where he served as a soloist and
concertmaster. Upon his return in 1980 he headed the Stamic Quartet for 15 years, leading it
to international success and the reception of numerous prestigious awards. At present,
Bohuslav Matoušek maintains both solo and chamber careers while also functioning as a
teacher. Together with the Czech Philharmonic and the conductor Christopher Hogwood, he
recorded the complete works of Bohuslav Martinů for violin and orchestra.

Miroslav Sekera
attended the Prague Conservatoire and then Miroslav Langer’s class at the
Academy of Music in Prague. In 2002 he triumphed at the International Johannes Brahms
Competition in Pörtschach, Austria. He has visited prestigious venues in Vienna,
Washington, or Tokyo as both a solo and chamber player. He regularly collaborates with
Czech Radio and with leading Czech orchestras and festivals. His long-standing artistic
partners include the violinist Josef Šaček, the mezzo-soprano Dagmar Pecková, or the
hornist Radek Baborák. In 2016 he made his debut in the Dvořák Hall of Prague’s
Rudolfinum as part of the “World Piano Music” series. Last year he performed at the Rudolf
Firkušný Piano Festival in Prague. In 2019 he toured Japan with the legendary cellist
Tsuyoshi Tsutsumi and later also appeared as a soloist at the international festival in
Karuizawa, Japan. In April Supraphon released his solo album with the works of Liszt and
Smetana.