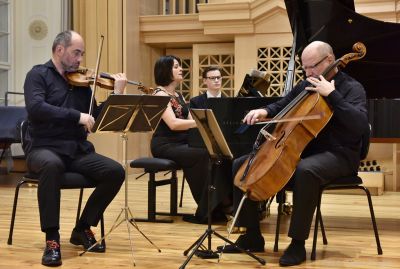 Dumkas for Piano Trio Op. 90 by Antonín Dvořák is the crowning, fourth and final work of
its kind in the composer’s oeuvre. Or to be precise, the sixth, though his first two early piano
trios were not preserved. Dvořák wrote the Dumkas over the course of three months, from
November 1890 to 12 February 1891. It seems that he needed some “lighter” material to
clear the palette after his momentous Requiem. In a letter to his friend Alois Göbl in Sychrov,
he informs that he is writing “brief compositions for violin, cello, and piano. It will be jolly and
sad. At times like a woeful song, then like a merry dance, but in a lighter style, a more
popular one, so to say, in short, for both the upper and the lower.” The six dumkas, “brief
compositions for violin, cello, and piano”, appear to comprise more of a cycle than a
traditional trio in the sense of Dvořák’s usual approach. However, the overall arrangement of
the movements suggests the sonata form. The first three dumkas are labelled attacca and
could constitute the introductory movement. The fourth dumka could represent the slow
second movement, while the fifth is reminiscent of the scherzo and the sixth could stand in
for the final rondo. The keys of the individual parts are highly diverse, despite the whole trio
being generally marked as E minor. The dumka has an interesting place and role in Dvořák’s
oeuvre: it is based on the alternation of two strongly contrasted tendencies – one
melancholic, the other rhythmically wild. Dvořák liked contrasts and made use of them
throughout his works. The dumka appears in his compositions both in two separate early
works and in his Slavonic Dances, String Sextet Op. 48, Piano Quintet Op. 81, String Quartet
Op. 51, before culminating in the aforementioned piano trio Dumkas. The composition is
much more demanding that it seems. Dvořák was said to declare that the “Dumkas are
immensely sensitive, with regard to performance”. Dvořák chose the Dumkas for his farewell
tour of Bohemia with the violinist Ferdinand Lachner and the cellist Hanuš Wihan before
departing for the US. The work was premiered just two months after its completion, on 11
April 1891 in Prague at a soirée organised in tribute to the composer, who had recently
received an honorary doctorate from the university in Prague.

Bohuslav Martinů (1890–1959) was very partial to chamber music, and trios account for a
total of 15 of his works. However, his exploration of the classic piano trio rendered just four
compositions, as in the case of Antonín Dvořák, encompassing a period of 21 years (1930–
1951). The first works for piano trio appeared during Martinů’s early days in Paris (1930 –
Five Short Pieces; 1939 – Bergerettes); the next composition followed a whole 20 years after
the first, in New York, with the final piece originating in the same place a year later. However,
only two of these works were termed a “trio”; the second of the set, composed in Paris in the
dramatic wartime year of 1939, is titled Bergerettes and presents Martinů’s distinctive take
on Neoclassicism, as was typical for his output in the 1930s. These “shepherd’s songs” as
the title could be loosely translated, are more of a five-part suite than a sonata in character,
and their simple three-part form includes hints of Czech folk melodies. The fast sections
display Martinů’s typical rhythmic progressions, based on the repetition of brief passages of
music. Bergerettes is a work brimming with joy and clarity, in stark opposition to the
atmosphere of the time in which they were created – shortly before the occupation of the
composer’s homeland. Although Martinů completed Bergerettes in Paris on 20 February
1939, he never heard the music; the composition was only found after his death, and it was
published and subsequently premiered by the Foerster Trio in 1963.

The Smetana Trio, established in 1934 by the pianist Josef Páleníček, is one of the pre-eminent
Czech ensembles of our time. It is a regular guest at major venues at home (the Prague Spring, the
Janáček May Festival) and abroad (France, Germany, the UK, Japan, the US). The ensemble
collaborates with leading conductors – Jiří Bělohlávek, Libor Pešek, or Stanislav Vavřínek – and
orchestras both domestic and foreign, such as the Bamberger Symphoniker, Orchestre
National des Pays de la Loire, or the Prague Symphony Orchestra. The Smetana Trio had
produced a plethora of recordings for various labels and has regularly worked with
Supraphon since 2000. In March 2016 they released a complete compilation of the Martinů’s
trios, which immediately earned widespread recognition throughout Europe and the US. The
recording also won a global poll for the best chamber music album of the year and thus
received the prestigious BBC Music Magazine Award 2017.