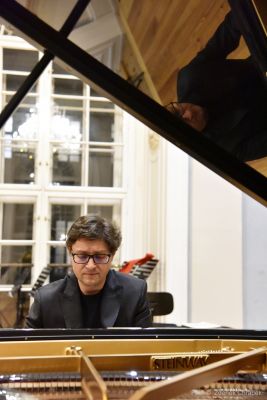 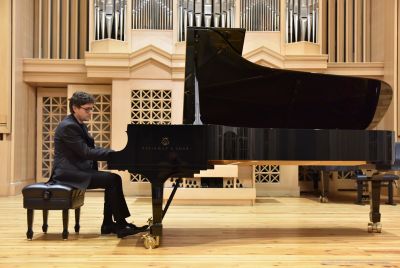 Leoš Janáček (1854–1928) arrived in the then-largely German-speaking city of Brno from
Lachia as an 11-year-old pupil and chorister of an Augustinian monastery. He remained loyal
to Brno his whole life. His style, which marks him as an inimitable figure of music culture
around the world, includes a passionately abrupt musical language, dramatic power
stemming from his use of speech tunes, and an intense lyricism packed with explosive
emotions. His musical realism is strongly grounded in folklore inspirations. It is thus no
wonder that his piano compositions weave Janáček’s originality with strands of
Impressionism and Expressionism, as is the case in his Sonata in E-flat minor “From the
Street, 1.X.1905”. The title of the work, of which only two sections have been preserved,
refers to a violent clash between the city’s Czech minority and the police at a demonstration
for a new Czech university. The death of the labourer František Pavlík led Janáček to
produce an impassioned and pithy musical statement.

The compositions of Franz Liszt (1811–1886) for solo piano, including the effective
paraphrases of works by other composers, are visionary achievements in both piano
technique and music form. Liszt was one of the best pianists of his time, comparable to the
violin genius of Paganini. His transcription of the theme from the Lacrimosa sequence of
Mozart’s Requiem ranks him among those who were fascinated by the myths surrounding
this unfinished work… The twelfth piece from his cycle of Transcendental Etudes recalls
the drifting of snowflakes, while the 1859 paraphrase of three melodies from Verdi’s opera
Rigoletto, written just eight years earlier, was to Liszt a symbolic expression of his personal
recollection of the happy days in Weimar.

Exactly because he had lived in Paris, because he had saved himself from the Nazis by
fleeing to the US, and because he was unable to return home after the war, Bohuslav
Martinů (1890–1959) imbued many of his compositions with an expressivity that is
considered “Czech”. The loosening of wartime limitations in 1945 was optimistically reflected
in his Symphony No. 4. He composed it in the spring and summer in a cottage by the sea on
Cape Cod, a peninsula south of Boston. He also wrote Etudes and Polkas in the same
place. These 16 pieces in three volumes draw from the music of classics, certainly also from
Smetana, but they are also permeated by his own musical understanding. The cycle was
premiered in January 1946 by Rudolf Firkušný in New York’s Carnegie Hall.

Bedřich Smetana’s (1824–1884) essential contributions to Czech music are his emphasis
on connecting domestic traditions with impulses from Neoromantic European art and his
innovative approach to the opera and the symphonic poem. But another remarkable facet of
his oeuvre is his Romantically rooted and challengingly stylised piano output. He composed
the concert etude On the Seashore in the summer of 1861, having definitively returned from
his five-year stay in Göteborg, Sweden. The music, which evinces Lisztian virtuosity
alongside salon-like elegance, can be heard to depict the crashing of waves on the shore…
The Pleasant Countryside from his cycle of Sketches captures impressions and moods
without superfluous effects, in stark contrast to the dark viscousness presented in Smetana’s
1859 sketch for piano titled Macbeth and the Witches.

Miroslav Sekera
attended the Prague Conservatoire and then Miroslav Langer’s class at the
Academy of Music in Prague. In 2002 he triumphed at the International Johannes Brahms
Competition in Pörtschach, Austria. He has visited prestigious venues in Vienna,
Washington, or Tokyo as both a solo and chamber player. He regularly collaborates with
Czech Radio and with leading Czech orchestras and festivals. His long-standing artistic
partners include the violinist Josef Šaček, the mezzo-soprano Dagmar Pecková, or the
hornist Radek Baborák. In 2016 he made his debut in the Dvořák Hall of Prague’s
Rudolfinum as part of the “World Piano Music” series. Last year he performed at the Rudolf
Firkušný Piano Festival in Prague. In 2019 he toured Japan with the legendary cellist
Tsuyoshi Tsutsumi and later also appeared as a soloist at the international festival in
Karuizawa, Japan. In April Supraphon released his solo album with the works of Liszt and
Smetana.