The Czech conductor Martin Turnovský died on 19 May 2021, at the age of 92. His successful international career saw him promote Czech music, including the works of Bohuslav Martinů. His 1965 recording of Symphony No. 4 with the Czech Philharmonic received numerous awards and is regarded as a decisive interpretation of the composition to this day. In 2006 he was presented with the Bohuslav Martinů Foundation Medal.

Martin Turnovský’s life was inextricably linked with the major historical developments of the twentieth century. He was born in Prague on 28 September 1928. His mixed ethnicity saw him deported to a concentration camp at the age of 16. After the war he enrolled at the newly established Academy of Performing Arts in Prague, where he studied conducting under Karel Ančerl – himself the newly appointed chief conductor of the Czech Philharmonic. He also trained under George Szell, who later helped him launch his international career. In 1958 he came to prominence with a triumphant performance at the conductors’ competition in Besançon. In the 1960s he held the post of chief conductor, first at the Pilsen Radio Symphony Orchestra and then at the Staatskapelle Dresden, while also conducting at the Dresden State Opera. He took the Czech Philharmonic on a successful tour of North America in 1965. That same year also gave rise to his recordings of Martinů’s Symphony No. 4, H 305, and Tre Ricercari, H 267, which were awarded the Grand Prix du Disque.

Following the Soviet invasion of Czechoslovakia in August 1968, Turnovský emigrated to Austria; he later obtained Austrian citizenship. He conducted at the Norwegian National Opera in Oslo and the opera house in West Germany’s capital, Bonn. He performed with world-leading orchestras the likes of the New York Philharmonic, the Cleveland Orchestra, the London Symphony Orchestra, the Bamberger Symphoniker, the Royal Liverpool Philharmonic Orchestra, or the Wiener Philharmoniker. He was also the principal guest conductor in Gunma, Japan.

After the Velvet Revolution, Turnovský returned to Prague, where he served as chief conductor of the Prague Symphony Orchestra in 1992–1996. He also maintained a teaching function in Graz, Austria. He continued to promote Czech music abroad; he brought Leoš Janáček’s Jenůfa to the stage in Cincinnati, Ohio, in 1997, followed by Dvořák’s Rusalka in Seattle four years later.

His decades-long career was also marked by numerous performances of Bohuslav Martinů. Besides the aforementioned fourth symphony, notable compositions include Czech Rhapsody, H 118, Bouquet of Flowers, H 260, or the oratorio The Epic of Gilgamesh, H 351. His lifelong advancement of the works of Martinů was recognised in 2006, when he was awarded the Bohuslav Martinů Foundation Medal. 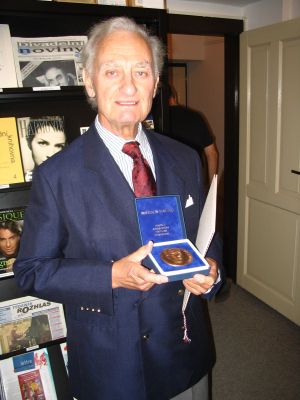