Ninth volume of the Bohuslav Martinů Complete Edition, the Piano Concertos Nos. 4 and 5, ushered in by Garrick Ohlsson

“I am very happy to be able to be here on this occasion. As a pianist who often takes to the stage, I have the opportunity to perform works that appear less frequently in concert programmes. I was attracted to Martinů’s music, and so years ago I decided to suggest Piano Concerto No. 4 for my performance with the New York Philharmonic. I then performed the work several more times in the United States, in Scotland, and here in Prague with the Czech Philharmonic. I am now planning to return to it again after a lengthy break,” remarked the American virtuoso, who presided over the jury for this year’s Prague Spring Piano Competition and also performed a live-streamed recital during the festival on Sunday.

Aleš Březina noted that “we could hardly have hoped for a more suitable patron to present this new volume of piano concertos from the Bohuslav Martinů Complete Edition than Garrick Ohlsson, who has a wealth of experience both with the music of Bohuslav Martinů and with that of other Czech composers, whose works he has promoted and continues to promote in major international venues. We are glad that Maestro Ohlsson found time for this ceremony in his busy Prague schedule and that he undertook it with characteristic elegance.”

Ivo Kahánek performed Piano Concerto No. 4 at the BBC Proms, and he recently recorded it with Jakub Hrůša and the Bamberger Symphoniker: “I am thrilled that the Bohuslav Martinů Foundation supported the publication of this volume, as these are truly extraordinary compositions. We used the new edition already when recording in Germany, and I must say it certainly helped immensely to deliver a successful result.” 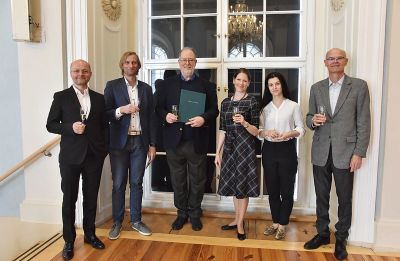 The new edition was edited by Ivana Kalina Tabak: “It is very special for me personally to know that this volume is placed under the patronage of Garrick Ohlsson, because I was at his concert with the Czech Philharmonic in 2010, where they played Incantation, and I even reviewed the performance. I am very grateful to Aleš Březina and the Bohuslav Martinů Institute for believing in me and allowing me to focus on this demanding but wonderful work. Research directly related to preparing the critical edition of the concertos led to the discovery of the composer’s manuscript and also the original orchestral parts of Concerto No. 4. The main task was to verify the authenticity of all details of the musical text of the existing edition of the concerto, which had not had any oversight from the author of the music. In the new edition of Fantasia concertante, the process is perfectly described thanks to the plethora of contemporary musical sources and correspondence. We finally managed to detail how the composer worked with the intended title of the work over the course of time. The published musical text offers a flawless example of characteristically Martinůesque articulation and dynamics, while also removing all accidental errors that appeared in the previous edition.”

“The Bohuslav Martinů Complete Edition is a truly long-lasting project, and there are dozens of volumes still waiting to be processed. It is a demanding journey, but one with great meaning and merit, and we are glad to be part of it,” added Eva Velická, Publishing Director at Bärenreiter Praha.

Videorecording of the ceremony