Five years ago, on 27 June 2016, the eminent Belgian expert on Czech music, musicologist Harry Halbreich, passed away after a long and difficult illness. As leading personality with unparalled contribution to the research of Bohuslav Martinů's legacy, he also authored publications on Olivier Messaien, Arthur Honegger, Edgar Varèse as well as Iannis Xenakis and Giacchinto Scelsi. He was a frequent jury member in contemporary music festivals and chaired the Société Philharmonique de Bruxelles. 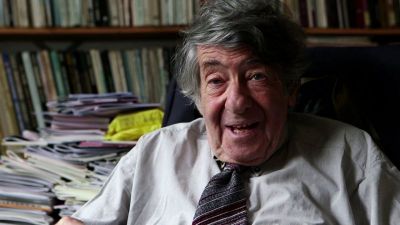 He first discovered the music of Bohuslav Martinů in 1948 when he saw Rafael Kubelík conduct his Double concerto at the Brussels Philharmonic Society. That event became a crucial moment of his life as he decided to devote his life entirely to music. As the 1950's were coming to an end, he had finished his studies with Olivier Messiaen at the Paris Conservatory and began to work as an assistant in a company that imported Supraphon recordings to France. He first came to Prague in 1958 and never ceased to come back. He created the Bohuslav Martinů catalogue, comparable to the Köchel catalogue of W. A. Mozart's works. The first edition of the Martinů catalogue was published in 1968 with a new version created in cooperation with the Bohuslav Martinů Institute in 2007. It featured an updated biography of the composer and a chapter about Martinů’s artistic personality.