Reviews: Symphony No. 1 in New York

Jakub Hrůša and New York Philharmonic performed the Symphony No. 1, H 289 by Bohuslav Martinů. For three evenings in February 10-12, 2022, it was to be heard with pieces by Zoltán Kodály and Franz Liszt in Alice Tully Hall. The American media are referring positively about the concert and the first performance of the symphony by New York Philharmonic. 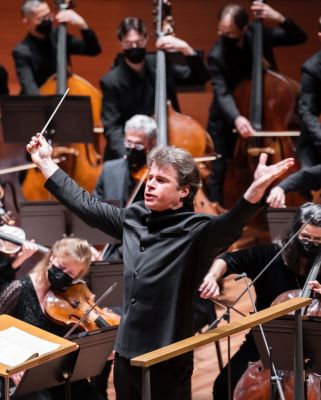 Joshua Barone for The New York Times: An Audition Season Begins at the Philharmonic

„Martinu’s Symphony No. 1, from 1942, was comparatively quiet — at least at first, because Hrusa took a long, almost theatrical view of the piece, building toward a climax and threading the four discrete movements. With a soft approach, his opening, of upward chromatic scales passed around the orchestra, was a garden of strangely beautiful flowers in bloom.

Those scales recur later, but Hrusa didn’t overemphasize them. Rather, they arose gracefully amid the work’s shifting character: the unsteady and rapidly escalating second movement, with strings given fleeting fragments of a phrase that could just as easily soar, the shards of a Dvorak melody; the thick textures of the darker third movement; and the dancing finale, in which even dolce passages sprint as if sprung.“

„Martinů’s First Symphony was the evening’s big, pleasant surprise. The conductor is a great champion of his compatriot’s music, and his glorious rendition was a highly convincing one. From the pair of B minor and B major chords at the beginning of the first movement to the last uplifting bars of the finale, Hrůša steered the New York Philharmonic through a soundscape full of rich textures where structures, colours and rhythms were wondrously wound together. Underlining the ambiguous melodic resolutions and the polymetric patterns, he revealed the uncanny sense of a constantly evolving organism that permeates the score. Details – such as the generous use of the piano as an orchestral instrument, a plangent oboe solo in the Scherzo or a cor anglais intervention in the Largo – were brought forward but remained perfectly integrated in the musical tapestry. The contemplative slow movement, opening with an eerie and dark melody played by the cellos and double basses, full of unobtrusive chromatic exploits, made one wonder why Martinů’s output, quite present in mid-20th-century American musical life, lost its appeal.“

Jay Nordlinger for The New Criterion: Czech it out

„After intermission, that Martinů Symphony No. 1. By the way, Jakub Hrůša, his bio tells us, is the president of the International Martinů Circle. The conductor certainly did well by the composer in this symphony.

It is a colorful, intelligent, enjoyable symphony. It is in four movements, the first of which is rather Impressionistic. You hear washes of orchestral sound. There is a hint of jazz, or jazziness, I believe. (I confess that, as an American, I’m always hearing jazz, including in unlikely spots.) The second movement, a scherzo, is a real winner. It is bouncy, angular, jazzy (ahem). A ball.

Then comes the slow movement, Largo. There was some beautiful playing by the Philharmonic’s low strings in this music. The movement as a whole has much beauty. There is also an inexorability to it—a somber inexorability. I thought of another largo, from another symphony: Shostakovich’s Fifth, written about five years before Martinů’s No. 1. I am not suggesting that Martinů did any borrowing. I’m not even suggesting influence. I’m saying, only, that I was put in mind of the Shostakovich.

Martinů’s finale? It is mainly festive, celebratory, and it makes a fitting, uplifting finish.

I think I can speak for most of the audience: it was good, very good, to make the acquaintance of Martinů’s Symphony No. 1. What else is out there? What other music has its light hidden under a bushel? Well, for starters, Martinů wrote five more symphonies...“