"Ivan Moravec strived to devote every spare second of his life to his piano, and his music love affairs - Mozart, Beethoven, Debussy, Ravel, and particularly Chopin. That is why I hold him in high esteem ever more for having sacrified, twice, a part of his closely guarded time to the name and work of Bohuslav Martinů. Firstly, when requested by his old friend Oldřich F. Korte, he studied and recorded three parts of "Etudes and Polkas" piano cycle for the non-commercial Bohuslav Martinů Foundation CD in 2000. Those who know how prudent Ivan Moravec was when it came to expanding his repertoire will surely appreciate it. Three years later, in 2003, he gave me an interview that forever captured his accounts on meeting Bohuslav Martinů in Roma in 1957. There, he depicted not only the content and topics of their encounter, but also the overall atmosphere describing everything from the composer's appearance, fashion style to his intonation and the extraodinarily slow tempo of his speech. In this interview, I believe, he revealed so much not only about Martinů but more importantly, about himself." 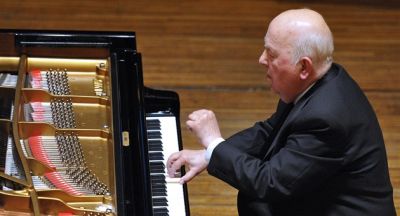 Read the interview with Ivan Moravec which he gave to Aleš Březina for Martinů Revue in 2003 here.