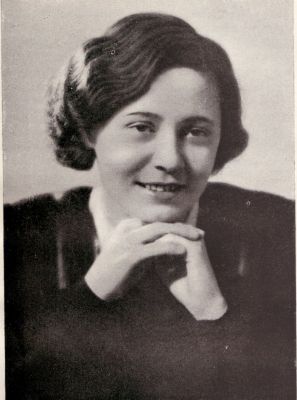 Precious few people played as significant and singular a role in Bohuslav Martinů’s personal, as well as professional, life as Vítězslava Kaprálová (1915–1940). Their permeation was far-reaching indeed – and, I would venture to add, of a nature that lasted far beyond the moment of the young female composer’s premature death. In my opinion, it was enrooted in Martinů’s subconscious much more deeply than he himself may have been aware.

Owing to the dramaturgical inspiration of the Czech Philharmonic Orchestra and the men at its helm - Jiří Bělohlávek and David Mareček – months ago I was asked to consider whether to include in my subscription concert in November 2014 a Kaprálová piece alongside works by Bedřich Smetana (Hakona Jarla), Alexander Porfiryevich Borodin (Symphony No. 2 in B minor, “Heroic”) and Béla Bartók (Music from the pantomime ballet The Miraculous Mandarin). The piece in point was the unfinished Concertino for Violin, Clarinet and Orchestra, one of the last works of the young artist before her constant poor health finally resulted in her death shortly after the outbreak of World War II. The Concertino was completed by the contemporary Brno-based Czech composers Miloš Štědroň (b. 1942) and Leoš Faltus (b. 1937). The solo parts in the performance I conducted were undertaken by the young violinist Irena Herajnová, a noted member of the Czech Philharmonic, and the superlative, still studying clarinettist Lukáš Dittrich – both of whom rose to the occasion admirably.

Never before had I encountered Vítězslava Kaprálová otherwise than as an “item” of Bohuslav Martinů’s biography, either on the general level or as specifically referred to in books by Miloš Šafránek and Jaroslav Mihule. I have read the correspondence between Martinů and Kaprálová (and her correspondence with other persons), I know Jiří Mucha’s insights, I have perused Jindřich Uher’s personally tuned testimony Ona a Martinů (She and Martinů). As a listener, I was familiar with Kaprálová’s Military Sinfonietta, Partita and Waving Farewell. Until that time, though, I did not know anything about the Concertino. I am glad that I have now had the opportunity to get to know it.

Messrs Štědroň and Faltus approached the piece in a manner that did not aim to disguise its incompleteness, making it possible to play yet still coming across as unfinished. Although this form can also be perceived as imperfection and non-finalisation, it does bring a positive dimension: the small work’s sketchy nature underlines that which now, possessing the given practical experience with Kaprálová’s music, most floats in my mind – a fierce clash between originality and hefty obstinacy to express herself boldly, in a new and novel way, on the one hand, and the unfinished process of crystallisation of her ability to master all compositional means, on the other, as well as her deliverance from the influence of her teacher and guide Martinů.

In this respect, the work itself is symptomatic even for non-specialists. The third movement is by far the shortest, and doesn’t even have an ending. Miloš Štědroň “finalised” the piece by applying the simple “fade out” effect, gradual reducing the sound of a single repeated bar. On a recording made years ago in Brno – with the soloists Pavel Wallinger and Pavel Bušek, conducted by Tomáš Hanus – the given effect was achieved by means of technology, in the manner in which many pop songs “end”. When we performed it live, the instruments gave rise to a “leaving” mini-effect. This finale may perhaps remind everyone of Martinů. The previous, first and second, movements, however, bear a far deeper seal of originality. We, so to speak, have a tantalising glimpse as to how far Kaprálová’s creation may well have evolved had she not died so young. Some elements are extremely nimble and singular (the work with the registers and the technical potential of the two solo instruments, an “unfeminine” even fierceness of expression, the ability to surprise by unusual starting and ending of statements, etc.), while others come across as experiments (as a whole – the frequent originality notwithstanding – the orchestration and the manner of spreading the rhythmic facet into individual instruments and instrument groups) or directly as incompletions (even if we accept the fact that the piece simply could not have been finished – I mean that other composers would have made such things as dynamics and articulation an integral part of their artistic intention right from the beginning, whereas, with minor exceptions, in Kaprálová’s Concertino this is totally absent).

A “heretic”, genre-related question (one bordering on “political incorrectness“) springs to mind, though: would we be so deeply interested in Kaprálová’s work had she not been a female composer? Her achievements on an international scale, in Paris and London, the extraordinary success she gained as a conductor (as a woman, almost a century ago, she gained the favour of such renowned orchestras as the Czech Philharmonic and the BBC Symphony – even today, in our professional universe, especially in the east, there are some nay-sayers who assert that a female conductor cannot attain as great acclaim as their male colleagues!) are of a dimension that, after Janáček and Martinů, precious few Czechs reached. But, in this regard too, Kaprálová’s gender played a significant role – at the time augmented by the aspect of absolutely unexpected surprise.

If this question actually makes any sense at all (it is as if we were to ask whether Leoš Janáček or Antonín Dvořák would have attained such great acclaim had they not been Czechs, and the like – one does not work without the other), it is not easy to give an answer. If Kaprálová had only composed the said Concertino, her success could not have been so great. Yet she wrote better compositions than the Concertino – to name just one: the Military Sinfonietta. And so we are confronted with the general, thorny problem of reviving less relevant and more “obscure” compositions. Is it worthwhile to oppose the unceasing repetition of Antonín Dvořák’s late symphonies and the Cello Concerto in B minor, presenting instead, for instance, his German-sung early opera Alfred, which certainly was highly ambitious but which in his old age Dvořák himself would have revised had a staging been proposed? (I mention Alfred without any agenda, as an example from recent time in the Czech Republic.)

In the long run, everything rests in the perspective we can or want to assume, and the context in which such works are performed. In the final analysis, a sort of “crooked justice” reigns in the world of popularity of major pieces by major composers. We must carefully distinguish where it concerns the question of not making the effort to learn anything beyond the “mainstream”, even by just slightly stepping aside into the sphere of the lesser known. It is indeed absurd that only The Bartered Bride and Vltava of all Smetana works, and the last three symphonies and the Cello Concerto in B minor of all Dvořák opuses, have been played over and over again. It is certainly worthwhile to identify what part of their immense volume of music is wrongly overshadowed by their more celebrated compositions. Yet when it comes to performing music live (the situation with recordings is slightly different), it is also the responsibility of us, interpreters, to consider carefully that which is a mere “marketing bomb” and that which is of such a quality that should urge us to fight vehemently for it to be included in the canon of regularly performed works. Some examples are as plain as a pikestaff: I will fight tooth and nail for Martinů’s Parables, Frescos of Piero della Francesca or The Greek Passion, possibly for his lesser-known symphonies (for instance, No. 3, which I raved about in my article here), but not as fiercely for every minor piece based on the concerto grosso principle he ever wrote. By the way, as regards Martinů, there are too many performers whose path to his music is actually hindered by the excessive quantity of works he bequeathed us.

How then does Kaprálová’s Concertino, and Kaprálová herself, stand in this regard? The Concertino was worth presenting this way. The composer’s anniversary is nigh and an institution such as the Czech Philharmonic should certainly express itself in relation to this historical exception of Czech creative musicianship. Kaprálová’s work was performed alongside Béla Bartók’s masterpiece – and this duly afforded it a context that did not leave anyone in the dark (the Czech Philharmonic players, as I sensed, included) as to what is mature and perfect, and what is still seeking. But the notion that the Concertino would become a permanent, successful part of the repertoire of any soloist or orchestra does, in my opinion, seem far-fetched. I am convinced (with all my affection for the composer, this particular opus, as well as the soloists’ superb performance) that the piece will remain a mere refreshment of this year’s Prague concert season. In the winter (19 and 20 February), the Concertino is scheduled to be performed again, in Brno – by Pavel Wallinger and Lukáš Daňhel, this time even “authentically”, under the baton of a female conductor (Olga Machoňová Pavlů). The context there will be totally different – the other possible: the concert will be given over in its entirety to Kaprálová’s music, it will be her portrait (in addition to the Concertino and the Military Sinfonietta, it will also feature the Suita rustica, Partita and Piano Concerto, with Lucie Czajkowská and Alice Rajnohová). I assume that this will have exhausted the two natural possibilities for some time to come.

Nevertheless, it is not the case of the mentioned Military Sinfonietta. If nothing else, it is a work by which Kaprálová, highly successfully, touched the pulse of her time. I believe that it will continue to be performed for reasons similar to those why Martinů’s Field Mass and Memorial to Lidice (in a slightly different connection) have been played. This is precisely wherein lies the main impulse and the main inspiration I got owing to the Czech Philharmonic: the wish to present this better-known Kaprálová work, and, if possible, abroad too. In this connection, I am very glad about the existence of the Kaprálová Society (www.kapralova.org), which takes care of the composer’s legacy in an exemplary manner. And those beyond our borders have not remained impassive to our “Vitulka” either: at the beginning of next year, a book penned by the Belgian musicologist Nicolas Derny, titled “Vítězslava Kaprálová”, is scheduled to be published.

I would like to wish all of you a beautiful Advent, and please forgive me for writing the November text so belatedly.