The Epic of Gilgamesh premieres in Brno! 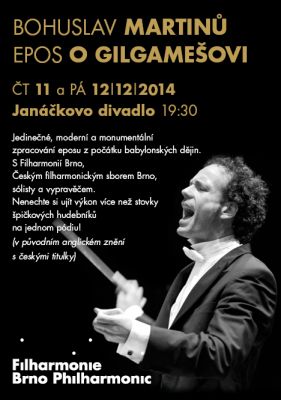 In the Janáček Opera House in December, the Brno Philharmonic Orchestra will present a unique, modern and monumental adaptation of the Epic of Gilgamesh, a seminal work from the dawn of Babylonian history. Although this musical work employs the text of the world’s oldest surviving piece of literature, its treatment of the questions of friendship, love and death remains topical to this day. Standing together on the podium with the orchestra, led by its chief conductor Aleksandar Marković, will be the Czech Philharmonic Choir Brno, soloists such as Adam Plachetka and Adriana Kohútková, and even a narrator and a mime artist. The performance involving more than a hundred top musicians will be in English (with Czech surtitles) and semi-staged, as originally conceived by Martinů.

Martinů created the Epic of Gilgamesh at the height of his exile period whilst staying in the South of France, only four years before his death. He reached for the oldest surviving literary text, and in composing his work employed the universally recognized translation into Elizabethan English made in 1928 by the archaeologist and Oxford professor Reginald Campbell Thompson. Deeply captivated by the epic from the dawn of Babylonian history, Martinů only began the compositional work after meditating on the philosophical essence of the text for several years. “He kept re-reading the whole epic and considered which part of it he should set to music,” said his wife Charlotte Martinů in her memoirs. The composer himself said the following about his choice of topic: “Despite the huge advances we have made in technology and industry, I ascertained that the feelings and questions which move man have not changed; they exist in the earliest known national literatures as much as they do in our own. These are the questions of friendship, love and death. The desire to find answers to these questions – answers that we still seek today – reverberates very intensely, and with an almost painful anxiety, throughout the Epic of Gilgamesh.”

The performance of the splendid Epic of Gilgamesh symbolically marks two important events in the world of classical music: the end of 2014, the Year of Czech Music, and the 55th anniversary of Bohuslav Martinů’s death (1890–1959). The 1955 work, exceptional in its own way, not only in Martinů’s oeuvre but also in the whole of the world’s musical literature, will be performed in the original English version (with Czech surtitles) for the first time in the Czech Republic. Uniquely, the Brno performance will be semi-staged, as originally envisaged by Martinů, and it will also be the premiere of the work’s critical edition, prepared by musicologist Aleš Březina, the director of the Bohuslav Martinů Institute, in cooperation with the publishing house Bärenreiter. To perform Gilgamesh, we have invited outstanding Czech and Slovak singers (Adriana Kohútková, Martin Šrejma, Jiří Hájek, and Adam Plachetka) and the Czech Philharmonic Choir Brno. Brian Caspe, an American actor based in Prague who has a great feeling for music, will narrate the work.

The spectacular work will be heard in Brno in the world premiere of the critical edition by Aleš Březina, director of the Bohuslav Martinů Institute and a veteran editor of the composer’s works. (His efforts include the reconstruction of the first version of the opera The Greek Passion, which received its world premiere in 1999 at the Bregenz Festival in co-production with the Royal Opera House, Covent Garden, where it was performed in 2000 and 2004. It received the prestigious Laurence Olivier Award for best new opera production in 2001 and in 2005 Covent Garden soloists came to Brno for guest performances of the work at the National Theatre.) In addition to many changes in the musical score, the main contribution of the critical edition of the Epic of Gilgamesh consists in the corrections to the libretto, and especially in the publication of hitherto unknown remarks by the composer concerning the semi-staging of the work.