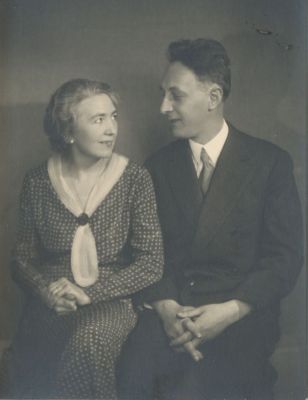 Charlotte Quennehen came from a relatively poor French family. Born on 21 July 1894 in Ochancourt, from the age of five she grew up in the village of Vieux-Moulin about eighty kilometers northeast of Paris. She was trained as a ladies' tailor and soon found employment in Paris as a seamstress. It was there on 10 November 1926 that she made the acquaintance of the composer Bohuslav Martinů, which radically changed her life. She began to get to know the enchanting world of an artist - a world full of interesting and famous people but also a world of wandering and of modest means, a world at the side of a man with no regular income. And she, the wife of a famous composer, worked hard in tailor shops as a matter of course until 1953. She took care of the household until the end of her life, and she was a support for her husband in difficult times. Through all this she gave him the most valuable gift a composer can receive - the possibility to compose undisturbed in a calm environment.

After her marriage with Martinů on 21 March 1931 in Paris, Charlotte experienced her husband's greatest successes as a composer at his side, but also fear during their flight from the Gestapo to America in 1941, and disappointment at post-war political developments in Czechoslovakia which prevented him from returning home. She fell in love with her husband's native country: already in 1959 - the year of his death - she began visiting it and furthering the dissemination of his musical legacy. In 1975 she was awarded honorary citizenship in the city of Polička, and two years later she founded the Společnost Bohuslava Martinů (Bohuslav Martinů Society) of which she became an honorary member. Also in 1977, she transferred rights to performance and publication of her husband's works to the newly-founded Nadace Bohuslava Martinů (Bohuslav Martinů Foundation) in Prague, and partly also to the Bohuslav Martinů Stiftung in Basel.

Charlotte Martinů died on 23 November 1978 in Villiers le Bel, France, and according to her wish to be buried with her husband in the cemetery in Polička she rests there with the Martinů family by the Church of St. Michael. A year after her death her husband's remains were brought there from his original grave in Schönenberg, Switzerland.