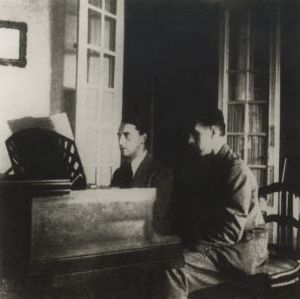 News from Japan: I think that the situation has begun to take a turn for the better. Or at least I noticed some two signs to this effect today. I gave a few interviews in Tokyo whose aim it was to advertise and explain some of my forthcoming Czech programmes to be presented here and duly attract attention to them. One of the journalists asked me in this respect: “Since you have been regularly performing Bohuslav Martinů’s works in Japan, am I right in thinking that the time has come to present to our audience something of a high quality, something that ensued after Martinů, for instance, compositions by Kabeláč?” Another journalist was less specific when it comes to the results of my activity, yet all the more was I pleased to hear him say: “As you may know, Japanese music-lovers had long given preference solely to music by the likes of Beethoven, Brahms, Chopin or Rachmaninoff. Then the situation changed and such creators as Mahler and Strauss, or Debussy and Ravel, were in. Janáček followed suit. Now the time has come for the most recent composers. Do you think that these can include Martinů, whom you are promoting here now so eagerly?”

I leave aside the fact that the Japanese consider Martinů a representative of the “most recent” generation of composers (it was meant as hyperbole anyway) and choose to savour these little nice fruits of my efforts over the past few years. Today, the Tokyo Metropolitan Symphony Orchestra and I diligently (yet not “forcibly”) rehearsed two Suk “fairy tales”: the Fairy Tale from Radúz and Mahulena and the Summer’s Tale. Within a mere two days, we have succeeded in preparing them in an artistic form I can vouch for to the full. When, in my dressing room, following a lunch break filled with my attempting in a television interview to describe the power of Kabeláč’s Mystery of Time, I heard from the loudspeaker capturing the sounds from the stage again and again (and increasingly beautifully) repeated phrases of the Blind Fiddlers for two solo English horns (the previous day, upon their own request, the whole chamber line-up remained at the rehearsal for twenty minutes longer so as to get through this subtle, enchanting movement of the great musical poem again) and before I “faced” the orchestra players’ repeated questions about the tiniest nuances of the dynamics, witnessing how, upon their own initiative, many of them explored the details of the score so as to fathom the intricate tissue of parts, how all of them gladly worked on balancing the orchestral sound, I was simply overwhelmed yet again by infinite gratitude and the feeling of the meaningfulness of such a conducting mission. Yes, let me say it as straightforwardly as I can: I love working with “my” orchestra in Japan. I have experienced here the most wonderful moments on stage – with Berlioz’s Symphonie fantastique, Debussy’s La mer, Strauss’s Alpensinfonie (this and Berlioz’s symphony have even been recorded at a single concert and released on CD), and last week with my first-ever (!) performance of Le Sacre du printemps. All this fills me with a great sense of satisfaction and, what’s more, I immensely enjoy it. And then special moments of this mission as a cultural “ambassador” occur and I am deeply moved when seeing the Japanese, more than adept in other music, yet humble, show a genuine interest in the beauty of Suk’s music (or, at another time, that of Martinů). Perhaps my feelings are not stupidly sentimental! ... I myself would not say they are. Being afforded the opportunity to experience them gives me monumental joy...

Initiation into the Rite

But now on a somewhat lighter note (after so many serious statements, the reader undoubtedly deserves a respite). Last week’s performance of Le Sacre du printemps was an incredible experience. To begin with, I couldn’t have chosen a better starting position – given the Japanese sense of rhythm and precision, performing the piece is an undertaking several degrees easier than elsewhere. I dare to claim, heretically, that here they would somehow manage to play Le Sacre even without a conductor. (Yet it seems fitting that I “compulsorily” add: Of course, that wouldn’t be the real McCoy! :-) ... Above all, I could afford to be open with such a fabulous orchestra. It is difficult to describe what a feeling it is (even given ten years’ experience) to start up this work for the first time. (“Start up” is quite appropriate, since the beginning does not overly depend on the conductor – perhaps only in the sense that you shouldn’t spoil it for the bassoonist [here an impeccable one!].) Those who have yet to experience it themselves simply don’t know. And I didn’t know either. That morning at the first rehearsal was one of the most difficult things I’ve ever experienced with a baton in my hand (the tension I felt could perhaps only be compared to “rehearsal-less” stand-ins in Carmen or La bohéme in the orchestra pit of an opera house). We got through to the end (I happy that I had only made a single silly error!) and I said to the orchestra: “Listen, I need a snifter!” There was no doubt that I was more knackered than anyone else. They looked at me with their clever, child-like eyes, in which one anticipates inner energy and humour, and I simply couldn’t resist telling them the naked truth – that it was the very first time I had conducted the piece in its entirety. In Japan, they don’t pretend that there is a positional and opinion gap between the orchestra and the conductor, with mutual friendliness and respect dominating. They gave in to the situation and set about discovering the “hoary” piece with me – as though from the beginning. I will never get weary of that. The concert was absolutely fantastic, but, nevertheless, sheer adrenaline rush. Although I’ve said that they could have played it without me (and they certainly could have), reality has another aspect (which deepens further the given paradox): There are precious few compositions in the case of which it is so goddamned crucial that the conductor doesn’t make a “blunder”! How many times have I inwardly thanked my teachers for helping me to create an infallible “manual technique”! And indeed – all of a sudden it is absolutely vital what direction your arm goes in after it has shown the so uncompromisingly vital “first one”. A bewildering experience. I have never had problems with stage fright, yet I have felt the burden of responsibility and the utmost tension. But not stage fright as such. And that time at the Suntory Hall was no different, either prior to or during the concert. But: Le Sacre came to an end, tumultuous applause was heard, I raised my arms to pick up the sensational bassoonist – and I could see my whole body trembling! Once it was all over, it hit me like a ton of bricks. And I couldn’t get to sleep until three in the morning...

Combining Stravinsky with Honegger and Bartók at one concert and Josef Suk at another during a single stay in Japan once again made me realise the sheer joy of the variety of the repertoire possibilities I can enjoy. It is difficult, really difficult, to say (and how many times I have had to!) what I like (most). They are different worlds. But this is nothing compared to what I experienced about two weeks ago in Saint Denis, Paris. Within a festival at the exquisite local basilica I had the honour to perform Dvořák’s oratorio Stabat mater with a French orchestra (Orchestre Philharmonique de Radio France), a Prague-based chorus (Prague Philharmonic Choir) and international soloists. On that very day, at the very same time, another concert, one of a somewhat different ilk, was taking place. Right opposite my hotel, at the Stade de France, the (alive and kicking) Rolling Stones were scheduled to take to the stage! The impact of this event was impossible to escape in any way (throughout the day). I wanted to exploit the maximum from the coincidence and so planned that after I had finished my spiritual upheaval at the cathedral I would go to my room and through the open window listen free of charge, as an encore, to the dashing rock classics. (I found the deranged nature and sheer extravagance of the situation so alluring that I had no intention of pondering whether the sequence of courses was palatable or not.) The Dvořák work, however, is rather lengthy and, what’s more, we had to start the concert perhaps twenty minutes late (the audience, not surprisingly, were not able to get to the venue by public transport on time), and there also ensued a moonlit party with (not only) a glass of (not only) wine at the “Saint Denis” garden. By the time I had finally got into the car that was to whisk me to my nearby hotel, I had long abandoned my plan anyway (Stabat mater was an uplifting spiritual experience and the performance was a great success, so I couldn’t even imagine anything but a blissful sleep).

But those rolling stones were simply impossible to avoid. Our car couldn’t get through to the hotel. We found ourselves face to face with thousands, tens of thousands, of people who were just returning from the stadium concert in the opposite direction. The only way of getting “home” was to take my “appurtenances” and walk (occasionally explaining myself to the ubiquitous policemen) “against the tide”. Seldom had I previously realised to such an extent the distance between two collateral worlds. The situation was verily symbolic: tens of thousands of informally clad rock fans bearing plastic beer cups, in a state of intoxication, uplifted by the decibels and the irresistible “non-ageing” energy of the legends, humming the rock standards, unrestrained in all respects (and I must add: there were fans of all age categories). And there he was, a solitary figure squeezing his way through the throng in a suit jacket, with a tail coat over his shoulder and a travel bag containing a sweaty shirt and a bow tie and shiny patent leather shoes and the score of a pious cantata, with his mind and soul filled with the tones that a while back had wafted through France’s oldest Gothic cathedral.

Perhaps I will be neither too personal nor too clean-cut...: The “collision” between the worlds wasn’t disconcerting in the least. Since it wasn’t actually a collision. We passed each other by and neither of the parties protested, both of them merry, each in a different way. I wouldn’t have swapped it for anything, and neither would they. Their faces radiated joy (many at least – some of them deviated from this impression still and all). Even though I have no idea what I looked like to them, I know that I was happy in my heart. And once again (for how many times it was?) I asked myself: What’s the point of “crossover”? The “borderline” made both parties as happy as can be and perfect sense in itself.