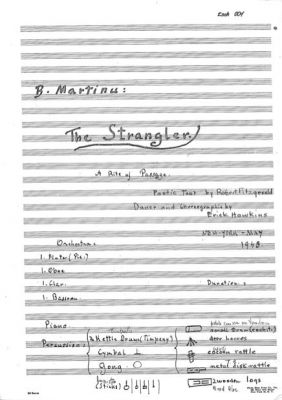 Bohuslav Martinů composed the ballet "The Strangler" subtitled A Rite of Passage, in May 1948, when he had been living in New York for seven years. While still in Paris, he had pondered the possibilities of presenting his music and gaining recognition in the USA, as is evident from his correspondence with Miloš Šafránek.

In a letter written in the French capital on 18 April 1939, he reckoned with being commissioned in America to compose "for soloists, for instance, or theatre, something smaller, for films". He also gave consideration to creating something in conjunction with the Czech artist Jiří Voskovec, who had arrived with his associate Jan Werich in the United States in early 1939.

Moreover, Martinů envisaged staging a performance of his opera Juliette, as he mentioned in a letter from Paris dated 2 June 1939: "Would it be possible to place an opera? But which one? Do you think it could be Juliette? Wouldn't it be a bit much for the audience to swallow? In Chicago, it would be possible to make Špalíček."

Read the full analysis by Lucie Dercsenyiová in the current issue of Martinů Revue 1/2014, pages 10 - 12.