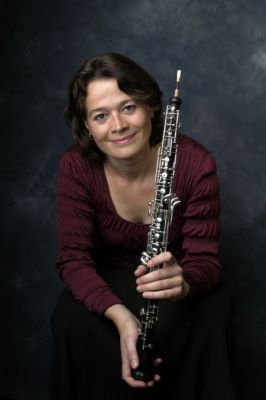 During the two abonnent concerts hosted by thePrague Symphony Orchestra FOK next week, the Dutch oboist Pauline Oostenrijk will assume the tricky task to perform Martinů's Concerto for Oboe and Small Orchestra, H 353. Pauline Oostenrijk conducted by the fellow Jac van Steen.
Pauline Oostenrijk fell in love with the composition many years ago when she had the chance to perform it in Utrecht. This time, the concert is organized as part of the Year of Czech Music 2014. Apart from Martinů's Oboe Concerto, the programme also features Alexander Zemlinsky'sSinfonietta, and Antonín Dvořák's symphonic poems based on Karel Jaromír Erben - The Water Goblin, The Noon Witch, and The Wild Dove.
Having won a number of international competitions, Pauline Oostenrijk has performed in the most prestigious halls of the world - including the Carnegie Hall. Recently, she has been devoting her time to literature, too: she is the author of a prize-winning book of short stories about music.