Max Kellerhals, a priest and friend of Bohuslav Martinu, has died on 24 August 2013. He was 95 years old. 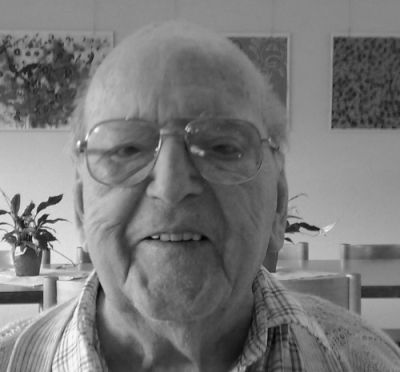 Throughout his active life, MAX KELLERHALS (1918 - 2013) was a priest in municipalities in the canton of Basel–Landschaft, near Liestal, the town in which Bohuslav Martinů died. Max Kellerhals accompanied Bohuslav Martinů in the final days of his life and participated in organising his funeral in Switzerland and, twenty years later, the transportation of the composer’s remains to Czechoslovakia. These significant events are referred to in the following excerpts of an interview Aleš Březina conducted with Kellerhals during the shooting of the film Return from Exile (Czech TV 1998, directed by Jiří Nekvasil).
Max Kellerhals made the acquaintance of Bohuslav Martinů at the beginning of September 1955 at the Besançon festival, where he, a great music lover, had come to attend a performance of Rafael Kubelík. At the festival, Martinů’s Concerto for Two Pianos and Orchestra, H. 292 was presented by the Belgian duo Janine Reding and Henry Piette.
After the Rebers returned from the USA, we visited Rafael together at his orchestra rehearsals, including those in Besançon. At one of the rehearsals, a married couple arrived and sat to the left of us. During the intermission, Rafael came over and asked us: “Do you know each other? They are the Martinůs.” So, that was the beginning of our very spontaneous relationship, which would last until Bohuslav Martinů’s death. The concert at Besançon was astounding, featuring, among other pieces, Martinů’s Concerto for Two Pianos and Orchestra, as performed by the Belgian piano duo Reding-Piette, who gave a fantastic account of it. The audience were enthralled and it was a tremendous success.
Martinů left the USA for good in the spring of 1956, and after arriving in Switzerland he first stayed with the Rebers in Basel and later on with the Sachers at Schönenberg, near Basel. Throughout the summer of 1956, Max Kellerhals saw the Martinůs several times a month. He described Martinů as “extraordinarily pleasant, not because he was a musician, but simply as a man. His humility, his calm, self-restrained way of speaking were part of what made him Martinů.” On frequent occasions, Kellerhals and Martinů had long discussions in an open, leisurely and light atmosphere, and not only about religious topics.
Max Kellerhals was present at the premiere of the oratorio The Epic of Gilgamesh, H. 351 in Basel in 1958. He was sitting in the first row, close to the composer. He also accompanied Martinů at the performance of Juliette, H. 253 in Wiesbaden, Germany, in January 1959, the very last staging of the opera that the composer saw.
When in the summer of 1959 Martinů was hospitalised in Liestal, Max Kellerhals became one of the Martinůs’ closest friends. Charlotte Martinů wanted their marriage to be additionally blessed by the Church, and hence, on 16 August, Max Kellerhals married Charlotte and Bohuslav Martinů in church. Their witnesses were the Rebers.
We celebrated the wedding in his hospital room (where he later died) in the simplest, most human, most friendly manner. After the ceremony, Maja Sacher took out a small case from her bag and gave Charlotte Martinů a diamond ring as a wedding present. Then she opened the bag, took out a few glasses and a bottle of champagne, and said something like this: “We must toast the marriage.” And all of us, almost moved to tears, raised a toast to Charlotte and Bohuslav Martinů’s marriage in the room in which 14 days later he died. For all of us, it will for ever remain something amazing and unforgettable.

Max Kellerhals served a requiem mass for the deceased composer at the Roman Catholic church in Pratteln on 1 September. At the funeral, the violinist Petr Rybář performed the middle movement from Bohuslav Martinů’s Sonatina, H. 262. Marcel Mihalovici and Max Kellerhals delivered eulogies over the coffin. Following the mass, the embalmed body was committed in a coffin into a grave at Schönenberg, at the edge of the forest of the estate where Martinů had stayed and composed as the Sachers’ guest.

In the summer of 1979 the exhumation and transfer of the composer’s remains to Polička was approved. On 16 August the coffin containing Bohuslav Martinů’s embalmed body was taken out of the grave at Schönenberg, in which it had rested for twenty years. Representatives of the Czechoslovak authorities and a group of Swiss citizens, including Max Kellerhals, were present at the opening of the coffin. The priest also attended the ceremony in Polička.

Following Charlotte Martinů’s death, Max Kellerhals continued to take an active interest in having his friend’s works performed, met soloists and conductors, acquainting them in his cordial and lively manner with the composer’s personality and music. Since the foundation of the Martinů Festival in Basel in 1995, he was a keen promoter and, as long as his health allowed, he also visited the Bohuslav Martinů Festival in Prague and all performances of his operas in nearby countries. Since 2002 he lived in a home for the aged in Frick, near Basel, where every Sunday he served mass and every day listened to music, including that of his dear friend Bohuslav Martinů.