Geraldine Mucha passed away on 12 October in Prague

Geraldine Mucha, Scottish composer, wife of Czech writer Jiri Mucha (son of Alphonse Mucha and close personal friend of Martinu) passed away on 12 October in Prague. She was one of the founding members of International Martinu Circle. 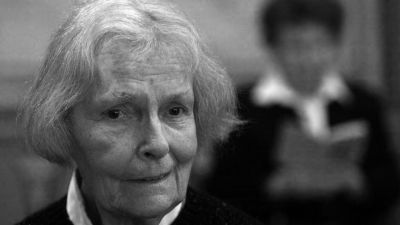 Born in London in 1917 of Scottish [Orcadian] descent, by the age of four she  was showing an ability to improvise at the piano. Impressed by this creative talent, her father taught her to write down the tunes which came forth. In 1936 she obtained a composition scholarship at the Royal Academy of Music where her teachers included  Benjamin Dale, William Alwyn and Alan Bush.

A chance meeting at a party in Leamington in 1941 led to her marriage to the Czech writer Jiří Mucha. He was the son of  the turn-of-the-century artist Alphonse Mucha who
had settled in Paris and was famed for his poster portraits of the actress Sarah Bernhardt. Jiří  served with the Free Czech Army in France in 1939/40. In Paris he provided the composer Bohuslav Martinů with the text for his Field Mass, intended for performance by  the Czech Army Band  whose director was Vilem Tausky. Any prospect of a first performance was to be overtaken by events.

Jiří had married his first wife, the young composer Vitězslava Kaprálová, early in 1940. The marriage was to be tragically short with her death in June of that year. Following the fall
of France, Jiří along with most of the Free Czech Army succeeded in escaping to England. They came to be based at Leamington.

Jiří was engaged as a war correspondent by the BBC for which purpose he was transferred to the Royal Air Force with the rank of Flying Officer. He also participated in broadcasts by the BBC Czech Service and, through  these connections, Geraldine was engaged and came to work on a regular series of music programmes for the Czech Service along with the baritone Otakar Kraus and the pianist/conductor Walter
Susskind, both refugees from Czechoslovakia, Susskind made all the instrumental arrangements for the broadcasts while Geraldine undertook the piano arrangements and
also participated  as an accompanist. She recalls that some of the Czech and Slovak songs transmitted incorporated coded messages within their texts destined for the Czech resistance movement, as was the case with  BBC broadcasts to other occupied countries in Europe.
The programmes were recorded at Broadcasting House and later at Bush House when the Czech Service subsequently moved  there. Geraldine also recalls the occasion of
Vilem Tausky's first conducting engagement for the BBC. The work to be performed was Martinů's Tre Ricecari. Tausky arrived at the recording studios in his Army battle dress
with no time available for rehearsal. Everyone was astonished by the results he was able to achieve. After the war Tausky settled in England and was in much in demand as an
orchestral  and opera conductor. He gave some notable Martinů performances including UK premieres of the Field Mass and Symphony No.6.

The Mucha and Kraus couples shared a flat off the Edgware Road close to Marble Arch.
Jiří already knew Otakar and Manya [Marie] Kraus from their time together as refugees  in Paris. As a BBC war correspondent Jiří  was often away from London for
extended assignments to North Africa, Italy and France. Kraus, who was known as Karel Otakar to disguise his true identity, was also frequently away on tour with ENSA
[Entertainments National Service Association] the organisation which arranged entertainment for the British forces at home and overseas. As a result Geraldine and Manya became close friends.

Jiří [known as George Mucha at the BBC] was a regular contributor to the evening War Report broadcasts on the BBC Home Service from June 1944 until the end of
the war. He recorded a graphic description of American forces entering Aachen, the first German city to fall to the Allied armies. In May 1945, with the battlefront disintegrating, Mucha drove his Jeep into Prague ahead of the advancing American armies. German forces continued to resist there for several days after the official surrender.
In the weeks which followed Geraldine made many attempts to join her husband in Prague but permits for civilians to travel in Europe immediately after the war took a low priority. In October Jiří  finally managed to secure a passage for her on a military Dakota troop transport flying from Paris to Prague with a French cultural delegation. Her recollections of Prague at that time are of a vibrant city with American and Russian
soldiers intermingling on friendly terms with young Czech girls prominent in national costume.

Martinů, who had settled in America in 1941, was expected to return to his homeland. Geraldine had always admired the composer and hoped to study with him in  Prague but this never came to pass. She was ,however, able to undertake  translations of the Field Mass and the Novy Spalicek songs together with the Songs on One Page and  Songs on Two Pages. Her translations were incorporated in the published editions of those works.

In Czechoslovakia Geraldine established herself as a composer.  Among her orchestral compositions to her credit are a Piano Concerto,  Macbeth Suite, and Overture for
Shakespeare's Tempest . She has also composed numerous works for chamber ensembles and vocal and piano music. There have been performances, broadcasts and
recordings of her works in the Czech Republic but she virtually unknown in Britain.

Geraldine continued to live in Czechoslovakia, even when her husband was imprisoned by the Communist regime because of his wartime links with the West. He remained in Czechoslovakia after his release believing that there was a better prospect of changing the regime from within, rather than going into exile. This became a source of disagreement with his friend the conductor Rafael Kubelik who had settled in London.

Prior to his death in 1991, Jiří Mucha was striving to promote the international status of his father Alphonse Mucha. These aspirations were to be fulfilled by Jiří and Geraldine's son John Mucha who created the Mucha Foundation and Gallery in Prague devoted to the artists paintings. Geraldine continued to reside in the Mucha residence in Hradčanské náměstí next to Prague Castle. She regularly visited Scotland each
summer.

Following his death in 1991, Geraldine composed  the Epitaph In memoriam Jiří Mucha. It ends with a haunting evocation of the Skye boat song. That song has a particular
resonance for her. It was sung at the party in Leamington back in 1941 when she first met Jiří Mucha.