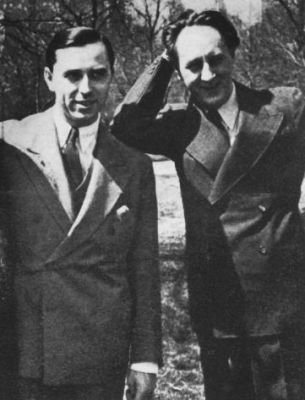 The most successful laureate in the piano category will receive the Rudolf Firkusny Prize, given in addition to the main prizes awarded for each instrument. In speaking about the prize, Firkusny’s two children,  Véronique  and Igor, said, “In addition to recognizing our father’s seminal association with the Prague Spring Festival, the Rudolf Firkusny Prize is also intended as a symbol of his lifelong dedication to Czech music and his enduring commitment to pedagogy and young musicians. It is our hope that it will inspire similar passions in its winners.”

The first Prague Spring International Music Competition took place in 1947.  Since then the competition has grown into an annual event comprising 16 musical disciplines, with several categories coupled in a different combination each year.  The 2011 competition categories are trombone and piano. The competition in the piano category will be held in Firkusny’s memory in perpetuity.

The Czech piano virtuoso Rudolf Firkušný (b. February 11, 1912) was among the principal performers at the first Prague Spring Festival in 1946, having freshly returned as an internationally acclaimed and respected artist from his immigration to America. On that occasion he appeared twice with the Czech Philharmonic at the Rudolfinum, in the Dvořák Concerto and in a concerto dedicated to him by Pavel Bořkovec, and gave a recital in the Smetana Hall of works by Frédéric Chopin, Bedrich Smetana, his teacher Leos Janacek, his close friend Bohuslav Martinu, Igor Stravinsky and Samuel Barber.

In 1990, forty-four long years later, after the fall of the Communist regime and the Velvet Revolution, Rudolf Firkušný finally returned to the stages of both Prague concert halls. He performed at the 1990 Prague Spring Festival with the Czech Philharmonic and Jiri Belohlavek, playing Martinu’s Second Piano Concerto, the world premiere of which he had given in Prague in 1935, under the baton of Vaclav Talich.

In 1992, Firkusny was heard at the Prague Spring Festival for the last time, again with the Czech Philharmonic and Belohlavek, in the Dvorak Piano Concerto and in an unforgettable recital with Josef Suk. The following year, Firkusny was the chairman of the international jury of the piano competition, and in 1993 was also appointed president of the Prague Spring Festival.  He looked forward to moving back to Prague, but this dream was not to be realized.  He died on July 19, 1994, at the age of 82, in Staatsburg, N.Y.

In 2007, Firkusny’s children Véronique and Igor, who live in the United States, agreed to the naming of the piano competition in his honor.  Both will be present in person at the final concert and will participate in the official presentation of prizes to the laureates at 11 a.m. on Sunday, May 15, in Brožík Hall of the Old Town Hall.