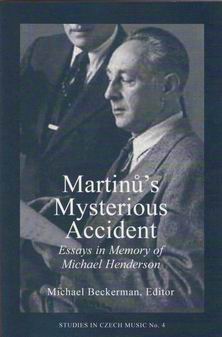 Bohuslav Martinů (1890-1959 was one of the most prolific composers in the 20th century. Despite the fact that he lived for several years in the United States and had many of his works premiered in this country, he still stands as an enigma. This collection of essays by an international group of experts, is dedicated to the memory of Michael Henderson, who died in 1994 at the age of 47. Henderson was in the process of writing a biography of the composer. These essays include a range of new approaches to Martinů- Judy Mabary gives a concise history of Martinů's collaboration with choreographer Eric Hawkins, The Strangler; Ales Brezina looks penetratingly at the often tortured relationship between Martinů and the Czechoslovak government; and Michael Beckerman explores questions of construction in Martinu's Piano Concerto No. 2. Shorter pieces by Czech scholars Isa Popelka and Jaroslav Mihule are also included. In addition, there will be an essay by Michael Henderson on "Martinu's Mysterious Accident" which will shed light on one of the most harrowing events in the composer's life.