New issue of Martinů Revue is out! 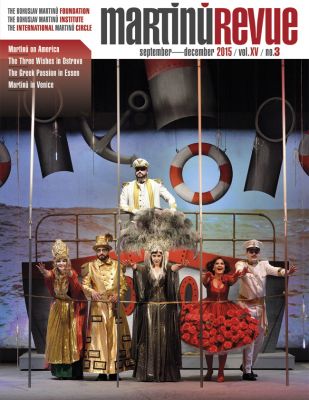 The third and final Martinů Revue of 2015 is finally out!

Last year we celebrated the 125th anniversary of Bohuslav Martinů´s birth which is why we had the opportunity to admire composer´s works even more frequently.

In the current issue of Martinů Revue you can find reviews on Martinů´s film-opera The Three Wishes, H 175 or his „refugee“ opera The Greek Passion, H 372 performed in Essen. Apart from it, there is an interview with President of the International Martinů Circle and newly appointed chief conductor of the Bamberger Symphoniker Jakub Hrůša or you can read a special article „Impressions of America“ written by Bohuslav Martinů himself, published three years after composer´s escape to the USA from France in 1941.