Iranian-American harpsichordist Mahan Esfahani will perform Martinů's Deux pieces pour clavecin in a solo recital at this year's Cheltenham festival. The concert will be recorded for a broadcast on BBC Radio 3.

‘While conceiving this programme I was reading a great deal of magic realism and reflecting on art that is “out of time and out of place.” Bach, of course, transcends all these boundaries, and in the case of modern music I hope that people will see that the harpsichord can also exist outside of the artificial boundaries that have been drawn for it,’ says Mahan Esfahani about his recital.

A former student of legendary Czech harpsichordist Zuzana Růžičková, Mahan Esfahani has just released a new record on Deutsche Gramophon, called Time Present And Time Past, the first harpsichord recital released on DG in more than thirty years covering the music landscape from Bach to Reich. You can book tickets for his Cheltenham performance at the festival website. 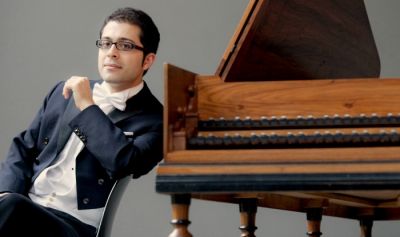