Main sponsor of the concert

Prague, 11 October 2016 – The Bohuslav Martinů Institute and Foundation in Prague are delighted to announce that the new volume of the Bohuslav Martinů Complete Edition with chamber music for 6 – 9 instruments is out. Festive launch will take place on Monday, 17 October 2016 in Czech Museum of Music in Prague. Members of PKF – Prague Philharmonia will perform every piece of the new volume.

„The pieces are composed for unusual combinations of winds and strings, they share a distinguished sound originality and high artistic quality. For the first time ever they will be performed in a single concert, moreover from their critical editions replacing those 50 or more years old,“ says Jitka Zichová, editor and coordinator of the BMCE published by Bärenreiter Prague.

This project formally affirms Martinů’s pre-eminent position as one of the classics of the 20th century music. It will include more than one hundred volumes to be published over the next fifty years. One year ago Czech Republic’s Minister of Culture Daniel Herman and Chief Conductor of the Czech Philharmonic Jiří Bělohlávek launched the first two volumes of the Bohuslav Martinů Complete Edition (The Epic of Gilgamesh and Symphony No. 4) at Smetana´s Litomyšl Festival. Among its subscribers are important European and American universities, music archives and other significant music institutions around the world. The Epic of Gilgamesh was awarded the German Music Edition Prize for "Best Edition" 2015 by The German Music Publishers Association.

„This new complete edition – which I strongly recommend to music libraries and serious Martinů enthusiasts alike – should do much to bring his music in from the margins. These first two volumes are a most auspicious start to the project,“ claims musicologist Nigel Simeone in prestigious magazine NOTES, September 2016.

Besides of these awards and thrilled reviews critial editions are coming to life onstage in concert halls - providing the most important application of the long-term musicological work. In this season it will be particulary The Epic of Gilgamesh, H 351 in Prague‘s Rudolfinum with Czech Philharmonic and Jiří Bělohlávek and The Spectre's Bride, H 214 I A with Brno Philharmonic and talented Jiří Rožeň. 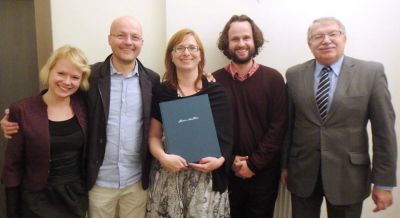