A story of Concerto for Violin and Orchestra No. 1, H 226 twice lost and finally found has already appeared in the Martinů Revue 2.2016. Read more in English in musical journal Hudební věda, no. 2-3/2016. 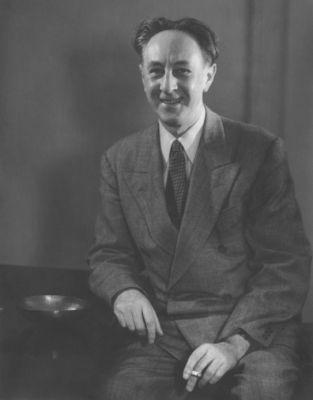 The genesis of this work is complex and the composition was considered lost shortly after it was finished. It follows from the surviving correspondence that Martinů worked on the concerto between 1932-1933 and regarded the composition as finished although the renowned violinist Samuel Dushkin (who had commissioned the work) kept pushing Martinů to make more and more changes. We learn about this process from the correspondence between Bohuslav Martinů and Polička as well as from the letters between him and Schott, which was supposed to publish the work. By the beginning of 1934, the premiere of the concerto under the baton of George Széll had been arranged and the publishing house had begun preparing the necessary materials for the performance. In a letter dated 5 October 1933, Willi Stecker from Schott wrote to Dushkin: „ Wir alle hier finden das Konzert ein ganz ausgezeichnetes Work und hervorragend instrumentiert.“ Nevertheless, it follows from further surviving correspondence between Schott and Samuel Dushkin that Dushkin was not quite satisfied with the work and, in the end, the premiere did not take place. We can speculate that Martinů may have been disillusioned after several years of effort to get the work performed and decided to "forget" about the concerto altogether. However, what really became of the manuscript of the composition at that time is not known. (Later on, in January 1939, Martinů composed a piece for violin and orchestra called Suite concertante, which Dushkin not only premiered in 1943, but he was also the dedicatee of the final version of the work). Therefore, Violin Concerto No. 2 from 1943 (dedicated to Mischa Elman) was long considered to be Concerto No.1.

In 1961, the musicologist and archivist Hans Moldenhauer bought the manuscript from another collector - Boaz Piller, a contrabassonist of Boston Symphony Orchestra (he bought it along with Scherzo Caprice which was, originally, the fifth part of Suite concertante I). Boaz was Martinů´s friend and in 1939 and in the 1940s the two men exchanged a number of letters. In 1972, Moldenhauer asked Josef Suk to play this concert in Chicago with Chicago Symphony Orchestra. The world premiere took place on 25 and 27 October 1973 and the Prague premiere with Czech Philharmonic followed shortly afterwards - on 8 and 9 November 1973. Suk had probably brought not only the copies of the individual parts to Prague, but a copy of the entire score must have existed as well because the concert was later, in 1976, published by Supraphon.

The subsequent journey of the manuscript continued after Hans Moldenhauer´s death in 1987, when his enormous collection was distributed into archives both in the United States and Europe. According to Harry Halbreich, a Martinů researcher and the author of the catalogue of Martinů´s works, the autograph was deposited in Hans Moldenhauer´s Archive in Spokane and then in the Library of Congress in Washington. In fact, the manuscript is in possession of the Library of Northwestern University in Evanstone, Illinois where, however, it was long deposited in an unprocessed part of the collection, which is why it was generally thought to have been missing.

That year in February, The Bohuslav Martinů Institute finally gained a high-quality copy of this very important source including a copy of the solo part. A copy of two pages of sketches, one page of corrections and a 12-page long "alternative ending of the concert" comes from the Northwestern University Library as well. The Bohuslav Martinů Institute now also available copies of the orchestral parts used during the world premiere kept in the archive of Chicago Symphony Orchestra. Further comparison and  thorough assessment of the sources will result from new research. We can look forward to seeing them in the concerto´s publication within the Bohuslav Martinů Complete Edition by Bärenreiter, which is going to be completed in the near future.