Half a century ago, Polička – the birthplace of Bohuslav Martinů – enjoyed a sensational event: in 1966 a crew of the BBC2 TV “moved in” to the town and within several weeks shot here the main part of a document about the life and work of its famous compatriot. At that time only a few people in the UK knew Martinů’s name or his musical work, and that’s why the movie director Anthony Wilkinson and the musical advisor Brian Large decided to present Martinů’s personality to the British TV audience. 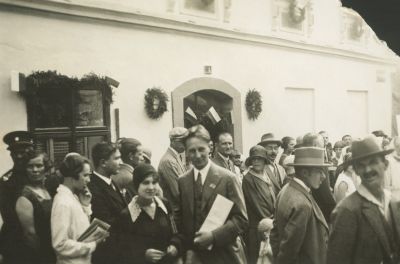 The film was shot in the spring of 1966 in Polička and the lovely countryside of the Bohemian-Moravian Highlands, and even some local people took part in its production.
Later the crew moved to Paris and New York, and the final scenes were shot in Italy and Switzerland.

The TV film called “Music of Exile” was shown for the first time on BBC2 in October 1967, exactly 50 years ago, but for reasons unknown has never been presented in Czechoslovakia. The regime at that time could not have any essential ideological objections against the film which was (as the policy of the BBC usually goes) politically completely neutral and could have helped to promote Czech music in the world. And so “Music of Exile” has nearly sunk into oblivion in this country …

Only last year its existence was brought to attention by a local patriot, Jan Edlman, who as a 21-year old student of English at a Prague University assisted to the British TV crew in making the film in Polička. With the help of the Internet he found contact with the director Anthony Wilkinson who is still active as the Director of the Wimbledon Music Festival (where he promotes the work of Bohuslav Martinů, among others) and asked him for permission to screen the film in Polička within this year’s Martinů Fest. Mr Wilkinson enthusiastically agreed and soon sent a copy of the film on DVD for unrestricted use. Jan Edlman, now a retired translator, started to translate the film’s commentary (co-written by the famous English writer Anthony Burgess, the author of “Clockwork Orange” made into movie by Stanley Kubrick) and in co-operation with museum Polička (consultations regarding quotes from Martinů’s diaries and correspondence and the titles of named compositions) and with the members of the Our Martinů Society prepared a definitive version with Czech subtitles.

This version will be shown for the first time in this country in the “Tylův dům” Theatre in Polička on Thursday May 25th 2017 at 7PM. The screening of the one-hour-long film will be followed by a talk with its creators (the director Anthony Wilkinson and his wife have already confirmed their participation, and we hope that the musical advisor Brian Large, who at present directs recordings of operas and other musical works and also conducts orchestras in the Metropolitan Opera in New York, will also take part).

Several local people who played in the movie also promised to come and talk about their memories from the making of this unique film of the BBC2 TV about Bohuslav Martinů. The whole event will take place under the auspices of the Town of Polička which also partly sponsors it, and the main organizer is the Our Martinů Society which invites you cordially to this remarkable event.