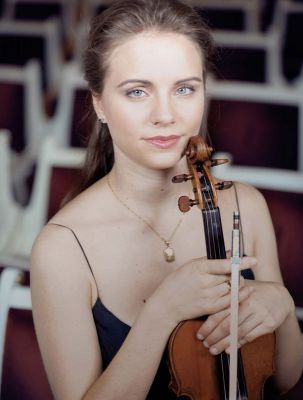 German violin virtuoso Julia Fischer returns to Prague on 11, 12, and 13 of March to perform Dvořák, Beethoven and Martinů's Violin Concerto No. 2., H 293 together with Czech Philharmonic and conductor David Zinman.

"To compose for the solo violin requires one to be in a special state of mind. [...] All we wish to express by a violin solo part must be contained in a single melodic link, which has to substitute, in a way, the impact of other constituents," wrote Martinů in the introductory note that accompanied the Concerto's premiere given by Micha Elman together with Serge Koussevitzky and Boston Symphony Orchestra on the last day of 1943.
Elman asked the composer for a new composition, which he was ready to include in his repertoire, based on his experience with Martinů's 1st symphony he had heard a few weeks before, performed by the Boston Symphony. Only two months later, the composer presented to Elman a completed score of the Concerto No. 2 for Violin and Orchestra, to the first movement of which he later added some cadenzas on the violinist's request.

"I had a following idea of the Concerto's structure: Andante, wide and lyrical canto of remarkable intensity leading to allegro, which makes best of the technique and virtuoso quality of the instrument, all seemingly a single movement composition. The final form has a concerto structure. I tried to maintain the first movement, the lyrical one, serious, as well as the middle part that is allegro; the andante theme returns close to the end of the movement. The second movement, as if it were a certain kind of 'relaxing bridge', which leads us up to final allegro. It is an intermezzo moderato, almost bucolic in a sense, which is accompanied only by a part of the orchestra and transfers into 'attacco', into the final part, conducted in allegro. This movement favors the violin virtuoso technique, interrupted by wide and massive 'tutti'. The Concerto ends in a certain 'stretto' in allegro vivo pace," explains Martinů.

The famous German violinist Julia Fischer is a fervent advocate of Martinů's music. Apart from a few recordings she is planning to make shortly, Fischer also collaborates on a new film on Martinů, together with director Brian Large. During her last year's residency at the Prague Spring International Music Festival, Julia Fischer gave an interview to Czech magazine Harmonie in which she explains her unrelenting efforts in promoting Martinů's work as well as how she discovered his music. You can read it here.
Or have a look at the video she also shot for Prague Spring where she largely explains her relationship to Martinů's music.

Julia Fischer will perform alongside Czech Philharmonic lead by conductor David Zinman on March 11, 12 and 13 from 7.30pm at Prague's Rudolfinum hall.