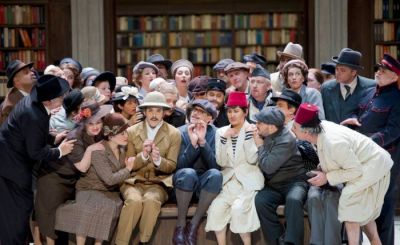 Reviews of the premiere of the production of Bohuslav Martinů’s opera Juliette (The Key to Dreams), H 253, given on 14 February 2015 at the Opernhaus Zürich.

“Last night, the Opernhaus Zürich delighted its audience with a generally accomplished production of a Martinů work that has been, unjustly, scarcely staged. The company’s director, Andreas Homoki, and its principal conductor, Fabio Luisi, embraced the opportunity to explore this gem, with the result being a precise stage and musical treatment, which met with great enthusiasm. [...] The set and costume designer Christian Schmidt has masterfully acquitted the rapid changes of scenes, ably supported by Franck Evin’s spectacular lighting design. [...] Annette Dasch sang Juliette in an enchanting, fervid manner. [...] The vocal performance given by the Canadian tenor Joseph Kaiser warrants a deep bow. [...] The first-night audience lavishly applauded the extremely intriguing, in many respects immensely entertaining, opera dating from the inter-war period [...], as well as the highly precise and enjoyable Opernhaus Zürich production.”

“An artist with a singular vision, the director of the Opernhaus Zürich, Andreas Homoki, particularly highlighted the commotion, bustle and chaos of a human community devoid of memory, thus facing a certain difficulty with depicting the more peaceful and more poetic aspects permeating the action. Christian Schmidt’s elaborate and naturalistic sets aided, but also hindered, him in this respect. [...] Just as the sets could have been less evocative of the “solid” material tangibility, more atmospheric and more ethereal, so could the musical component have been less evidently stigmatised by striving for explicit literality, with the conductor Fabio Luisi’s almost single-sided focus on the “Romantic” neo-Classicism in Martinů’s idiom [...] Vocally and dramatically, the tenor Joseph Kaiser afforded Michel’s colossal part the nature of an ordinary person. On the other hand, Annette Dasch dazzled in the role of the remarkable titular heroine with a balanced vocal line...”