Jan Vladimir Matejcek, a champion of composers', authors' and publishers' rights, international lawyer, business executive and tireless supporter of Canadian creators of music, passed away peacefully on Saturday, September 23, 2017 in Toronto, surrounded by his family.  Jan was a loving husband of Breda Mizerit, with whom he found happiness after the untimely death of Hanja Matejcek, his first spouse, and was the father of Jana Gonda (Peter) and Jan Matejcek jr. (Carolyn Cox), grandfather to Jana's children Christopher and Michael and to Jan's children Anna, Julia and Maya, and great grandfather to Michael's daughter Emma and stepfather to Breda's son Marko (Susy). 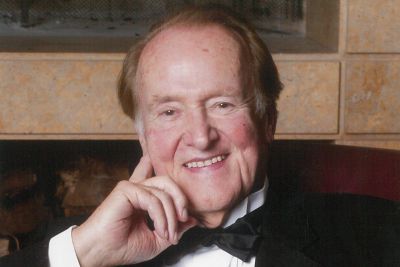 Jan was born in Hamburg, Germany, the son of the General Consul of Czechoslovakia on December 29, 1926 and received his law degree from Charles University and then went on to study musicology.  He settled on pursuing a life-long career in promoting music and helping composers and musicians.  Jan was gifted with a special talent for establishing new organizations to champion these causes and for bringing people with similar passion together using his amazing energy, language and people skills to work across borders, as he always believed that music and talent knew no national boundaries.  To that end, Jan continued throughout his life to write, lecture and act on questions of music, the arts and copyright internationally.

Among his many positions, he was the Managing Director of the Prague Symphony Orchestra, Foreign Relations Secretary of the Guild of Czechoslovak Composers and CEO of Panton, the Guild's publishing house, and prolific author of articles on classical music and classical composers in the international music press.

Shortly after the invasion of Czechoslovakia by Russian troops in 1968, Jan lead his family in a dramatic escape to Germany, where he worked with the prestigious German publisher, Schott Soehne.  A year later, he decided to emigrate to Canada.  There he first worked with the Canadian Music Centre, then became the Executive Secretary of the Ontario Federation of Symphony Orchestras and subsequently helped establish The Association of Symphony Orchestras as well as the Ontario Choral Federation.

Jan moved into the area of performing rights when he was invited to join the Canadian Authors' and Publishers' Association of Canada, CAPAC.  After seven years, Jan's focus on international copyright lead him to join the other Canadian performing rights organization, PROCAN, as Assistant General Manager and, eventually, in 1984 its President.  He lead PROCAN's effort to connect closely with all major international performing rights societies and oversaw a fivefold increase of revenue to writers and authors over a ten year period. He made the organization into one of the most efficient, fully computerized organizations for collecting royalties for performance of music created by many thousands of its members and international affiliates.

He reached the pinnacle of his career when he lead the way in merging the two then existing Canadian performing rights societies, PROCAN and CAPAC, into one powerful organization, called SOCAN – Society of Composers, Authors and Music Publishers of Canada. This merger was recognized by CISAC, the international umbrella organization for performing societies, as a "unique historic moment in the life of performing societies". In 1990, Jan was appointed the first CEO of the newly created SOCAN, an organization that continues to flourish to this day.

Jan retired in 1992 and SOCAN recognized his contribution by creating the annual "Jan V. Matejcek New Classical Music Award" given out at the annual SOCAN awards ceremony.
Although Jan accomplished so much professionally, his focus was first and foremost on his family.  He was the best husband, dad, grandpa and friend.  He enjoyed sharing his neighborhood and his cottage on Lake Simcoe, he loved playing his piano, going to the symphony, golfing, cooking and entertaining.  His constant good humour and wit were legendary and his "M" jokes will live on with his grandkids.  Most of all, we will all miss his great big bear hugs.

A celebration of life will be held at the Granite Club, 2350 Bayview Avenue, Toronto on October 28, 2017 from 11:30 to 14:30. RSVPs are requested by October 15, 2017 to mizbreda@hotmail.com.  Condolences can be sent to janago1@hotmail.com and/or mizbreda@hotmail.com.   In lieu of flowers and to honour Jan's love of music and longstanding advocacy for Canadian composers, the family asks that donations be made in Jan's name to the Canadian Music Centre (Legacy Fund).  Call (416) 961-6601, x105 or email to cminnes@musiccentre.ca  or to CMC, 20 St. Joseph Street, Toronto, ON M4Y 1J9.