Author of a Martinů biography, Brian Large, awarded a Bohuslav Martinů Foundation Medal because of his efforts in promoting Martinů´s legacy. He is known for his directing of New Year's concerts for the Vienna Philharmonic Orchestra and the legendary concert of the Three Tenors (Pavarotti, Domingo and Carreras) during FIFA World Cup in 1990, Italy. 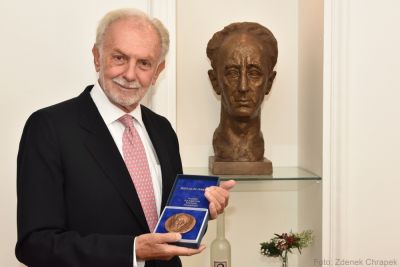 Large is a British television director specializing in opera and classical music broadcasts, author of a Martinu biography. Born in 1939, Brian Large studied at the Royal Academy of Music and the University of London where he obtained doctorates in Music and Philosophy. Postgraduate work took him to Prague. His biography of Martinů was concieved after several years of research spent in Czechoslovakia and France where he worked closely with Charlotte Martinů.

He joined the British Broadcasting Corporation as a producer with responsibility for opera and music programmes for the then new BBC2 television channel. BBC2 also produced a documentary on the life of Martinů which helped to bring about a greater awareness of the composer in the UK; a programme which many recall with affection. Brian was an advisor for this documentary, entitled "Music of Exile". Written by Anthony Burgess and produced and directed by Anthony Wilkinson in 1967, it was last screened this year in Polička.