The Bohuslav Martinů's Centre in Polička received more than 100 originals of letters, which Bohuslav Martinů and his Czech-American friend Frank Rybka exchanged during their long lasting friendship. Martinů met Rybka shortly after arriving in New York in 1941. Until now, researchers have been able to study only copies of this correspondence that Rybka's son James made available to the Bohuslav Martinů Institute 10 years ago, now the originals will be available in CBM in Polička. 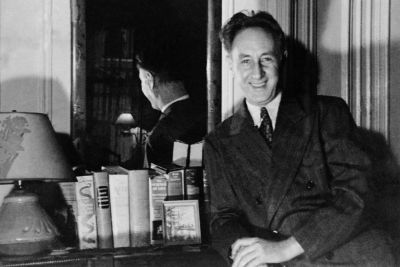 Originals of the letters were handed over by Rybka to Mr. Hynek Kmoníček, the Czech ambassador in Washington. Rybka wrote a book based on the letters Bohuslav Martinů: The Compulsion to Compose published by Scarecrow Press in 2011. On the occasion of handing over the letters he again stressed the main hypothesis of his book that Martinů suffered a special form of autism, called Asperger syndrome. Rybka, himself a plastic surgeon, admits that he is not specialist in this area and his evidence is contradictory and unclear.

In response to his book, several critics have emerged who refute Rybka‘s controversial and unsubstantiated hypothesis. For example, musicologist Erik Entwistle in the prestigious American musicological journal NOTES (9/2012, pp. 93-96,) writes that Asperger's syndrome is difficult to impart to a living patient. „Despite Martinů’s well-documented social awkwardness and compulsive working habits, it is impossible to retroactively prove that he had a developmental disorder of the brain,“ claims Entwistle. In addition, the Asperger’s diagnosis becomes an idée fixe in the biography through which Rybka tries to describe all deviations of Martinů's behavior at all costs. Composer's extensive and multi-layered correspondence with one of his greatest friends undoubtedly is a valuable source, unfortunately it is devalued by this to the level of "evidence material", which is additionally handled with considerable selectivity and utilitarianism.

Hopefully the Czech public will remember this generous gift by F. James Rybka (and his siblings) rather than James Rybka‘s ill-considered speculation about the composer's alleged illness.