The 73rd International Music Festival Prague Spring will offer around 50 concerts between 12 May and 3 June 2018. Its main dramaturgical line will be the commemoration of the 100th anniversary of the foundation of Czechoslovakia, which will be celebrated by the music of Czech and Slovak authors, whose works create a modern cultural picture of Czechoslovakia and the Czech Republic abroad. One of the main representatives of these authors is Bohuslav Martinů, his music will be performed for instance at the concerts of the Czech Philharmonic or Janáček Philharmonic Orchestra. 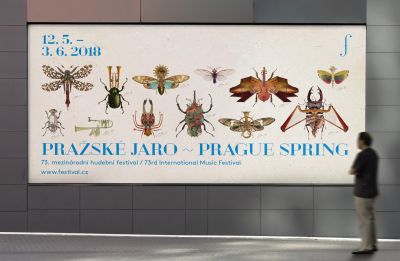 In the premises of the Czech National Bank, the Czech Nonet will perform on May 20 with an all-Czech program, which will also feature Martinů‘s Nonet No. 2, H 374. This piece was dedicated to and premiered by the Czech Nonet in 1959. “Now I am composing something for the Czech Nonet, for nine players; they are said to be first-class.” writes Martinů to his family in Polička in January 1959. Nonet No. 2 will be heard in the critical version from last year’s issue of Bohuslav Martinů Complete Edition: Chamber Music for 6 - 9 Instruments I (ed. Jitka Zichová).

In Smetana Hall of Municipal House, American conductor David Robertson with the Czech Philharmonic will perform Symphony No. 4, H 305, composed by Bohuslav Martinů in the USA in spring of 1945. It will be performed according to the Bohuslav Martinů Complete Edition issue edited by Sharon Andrea Choa released as one of the first of the project. This issue was awarded, for example, with positive reviews in the prestigious magazines NOTES and Musikforschung.

One day later in the same place, German conductor Heiko Mathias Förster and the Janáček Philharmonic Orchestra  will perform the orchestral composition Estampes, H 369, which Bohuslav Martinů composed 40 years after the foundation of Czechoslovakia.