The latest issue of Martinů Revue (3/2017) of 2017 was published and as always it contains all the latest news, reviews and interviews concerning the Czech composer Bohuslav Martinů, as well as information on recent publications and newly released albums with his music. 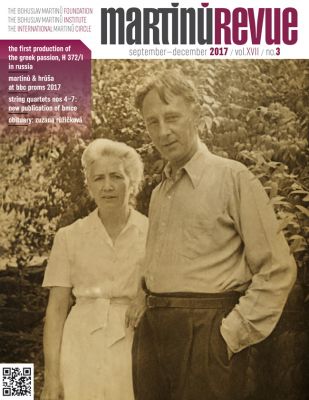 The rising conductor star and International Martinů Circle President Jakub Hrůša made his BBC Proms debut last year with the Czech program, which also featured the Field Mass, H 279. This concert, which focused on the theme of the Bohemian Reformation, is reminded by Martinů Revue with the enthusiastic reviews by Opera Today, Bachtrack or Music OHM. In addition to the reviews, Martinů Revue brings the transcript of the pre-concert talk with Jakub Hrůša, members of the IMC and the director of Bohuslav Martinů Institute Aleš Březina.

The BBC film "Music of Exile" about Martinů and his hometown had a Czech premiere within Martinů Fest in Polička last year, 50 years after the first screening. On this occasion Martinů Revue brings interviews with the translator and initiator of the premiere Jan Edlman, director Anthony Wilkinson and producer Brian Large.