Diapason d'Or for the Epic of Gilgamesh

The new recording of the Epic of Gilgamesh released by Supraphon last October received another prestigious award. In the February issue of the most prominent French magazine Diapason, it received the Diapason d'Or. The album, which features the Czech Philharmonic under the baton of Manfred Honeck, the Prague Philharmonic Choir and soloists, has since release been awarded the Disc of the Week (BBC Radio 3), the Sunday Times (Album of the Week) or the Sunday Times (Album of the Year). 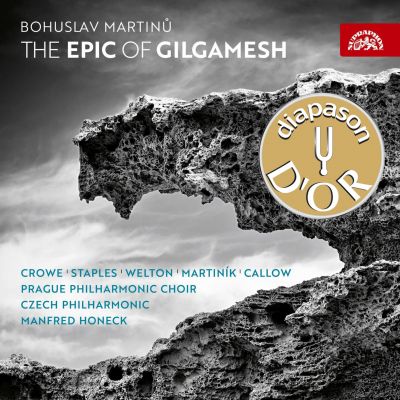 "I'm glad our recent recording projects have been so successful abroad - it's a beautiful reward for the energy we've put into recording," says the choirmaster of the Prague Philharmonic Choir Lukáš Vasilek. "I appreciate the fact that we perform on CD alongside of the Czech Philharmonic and great conductor Manfred Honeck. I look forward to promoting the Czech music in a such monumental manner in the future."

Martinů’s oratorio was recorded in January 2017 in Prague‘s Rudolfinum for the first time in the original English version, based on a score from critical edition prepared by the Bohuslav Martinů Institute (ed. Aleš Březina).

For more information on the album visit the Supraphon website here.